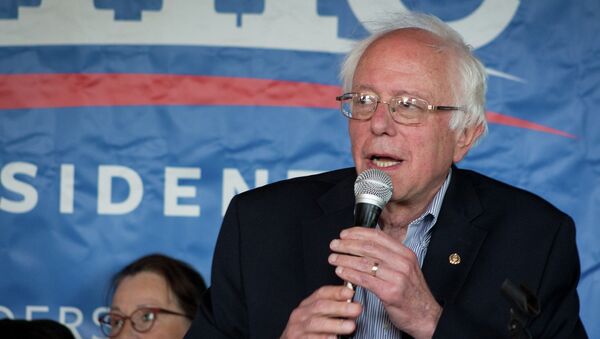 Bernie Sanders, the 2016 presidential candidate, defended his actions when it comes to gun control in the US Senate.

As Sanders Gathers Huge Crowds of Supporters, Soros Rushes to Clinton's Aid
At a campaign stop in Arlington, Virginia, Sanders was confronted by a chairwoman of Moms Demand Action for Gun Sense in America about some of his previous comments and votes regarding guns.

Honora Laszlo asked Sanders to explain comments that he made following the massacre in Sandy Hook, where he stated that he believed no legislation could have prevented the deadly school shooting.

"If you passed the strongest gun control legislation tomorrow, I don't think it will have a profound effect on the tragedies we have seen." Sanders had told Vermont Magazine.

Sanders explained that the state he represents, Vermont, is a rural state where many residents are hunters.  He conceded that for this reason, his perception of guns is different than how they are seen in urban areas.

Some on the left are mad at Bernie Sanders because he opposed a law that would allow families sue manufacture of gun in Sandy Hook shooting.

"I come from a state that has virtually no gun control and it turns out one of the safest states in the country. I come from a state where tens and tens of thousands of people hunt and do target practice. I understand that guns in my state are different than guns in Chicago or Los Angeles," Sanders said.

"People in urban America have got to appreciate that the overwhelming majority of people who hunt know about guns and respect guns, and are law-abiding people, that's the truth. And people in rural America have got to understand that in an urban area, guns mean something very, very different."

Record Numbers to Rally for US ‘Outsider’ Presidential Hopeful Sanders

He defended himself by following up with a list of votes he has made for better background checks and the banning of assault weapons.

"With all due respect, you also cast the vote to allow gun manufacturers to never be sued," Laszlo interjected, speaking on a 2005 vote shielding gun manufacturers from lawsuits if their weapons are used while someone is committing a crime.

"If somebody has a gun and somebody steals that gun and shoots somebody, do you really think it makes sense to blame the manufacturer of that weapon?" Sanders said. "If somebody assaults you with a baseball bat, you hit somebody over the head, you're not going to sue the baseball bat manufacturer."

Laszlo said she was disappointed by her favorite candidate's words, hoping that asking  hardball questions would change his mind on gun control in the US.

"He was dishonest in the way he talked about it. He is using this language that the NRA and their supporters use to polarize people," she concluded.

But the Senator didn't back down telling Laszlo in the end, "there have to be some compromises on both sides, and I don't apologize for that vote."