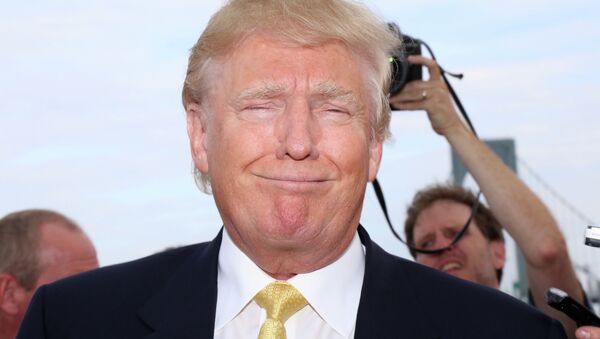 Whether you’ve heard two dozen times by now or none at all, Trump’s controversial remarks bear repeating:

There aren’t a lot of ways to misread that. A major US presidential candidate characterized most Mexican immigrants as being rapists and drug dealers, instantly alienating an entire group of people. A curious way to start what is essentially the nation’s most expensive popularity contest.

Donald Trump Attacks Jeb Bush's Wife on Twitter, Promptly Deletes Tweet
Trump, who makes his billions not only from real estate, but also from dealings with various US companies, immediately suffered the consequences. Spanish-language network Univision canceled plans to air the Trump-owned Miss USA pageant. NBC Universal followed suit. NASCAR, ESPN, and PGA of America all abandoned events originally meant to be hosted on Trump’s golf courses. He’s even earned the ire of entire countries, with Mexico, Costa Rica, and Panama all backing out of his Miss Universe pageant.

Most recently, celebrity chef Jose Andres canceled plans to open a restaurant in Trump’s new hotel in Washington, DC. Andres released a statement saying Trump’s comments "make it impossible for my company and I to move forward."

And on Thursday, the Federal Aviation Administration announced it would rename three navigational points which were (for some reason) named after Trump.

He did, at least, earn a coveted cameo on the Simpsons.

It’s not a good time to be Trump the Businessman. Trump the Politician, however, is on fire. After spending the last few weeks trailing GOP frontrunner Jeb Bush, all of the media attention seems to have catapulted Trump into – believe it or not – the lead.

In a new poll conducted by the Economist and YouGov, 15% of respondents named Trump as their preferred GOP nominee. That’s four whole points above Jeb Bush, who is also tied with Kentucky Senator Rand Paul at 11%.

As Contracts Crumble, Donald Trump Becomes White Supremacists' Favorite
He was also the preferred second choice, with 12% of those polled choosing Trump as an alternate to their preferred candidate. That’s five points above Bush and Paul, with 7% of respondents saying they would choose either of those candidates as a safety.

Still, even with those impressive poll numbers, he may be unable to hold onto the lead in the long-term. Those same respondents didn’t seem to have much faith in their preferred candidate, as 29% expected Jeb Bush to earn the nomination. Trump ranked fifth in that poll, with only 7% of respondents giving odds to the billionaire.

Trump may also have an uphill battle with the strategic elites of his own party. Rumors circulated earlier this week that Republican National Committee Chairman Reince Priebus had called Trump to request that he tone down his rhetoric.

Trump Dumped: NBC Drops The Donald Over Derogatory Remarks About Immigrants
Trump pushed back on these reports, insisting Priebus had called to congratulate him. Still, true or not, the YouGov poll points to a similar problem: over four in ten Republicans just don’t like the Donald.

If Trump’s poll numbers start to slide, will his business relations just as magically return? Stranger things have happened. Of course, if Trump does manage to secure the Republican nomination, and even less likely, the White House, Trump the Businessman will have to take a four year vacation, anyway.