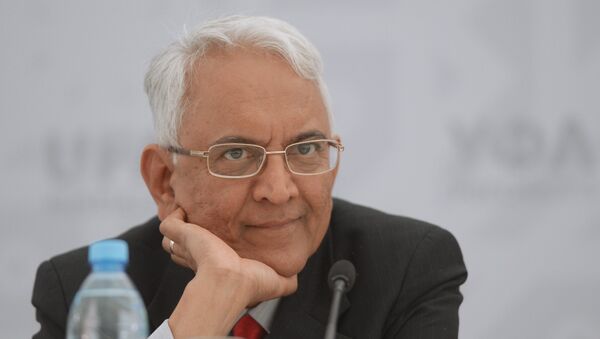 © Host photo agency
/
Go to the mediabank
Subscribe
International
India
Africa
Indian Ambassador to Russia Pundi Srinivasan Raghavan said that the issues between India and Pakistan are complicated, they are rooted in some fundamental problems of terrorism which need to be resolved.

Ambassador Raghavan underscored the role of the alliance in bringing the two nations together in the southwest Russian city of Ufa on the last day of the summit.

"But the issues between India and Pakistan are complicated, they are rooted in some fundamental problems of terrorism which need to be resolved,” the diplomat told Sputnik.

Ascension Procedure for India, Pakistan into SCO New Stage of Development
Relations between the two South Asian nations have been strained over a territorial dispute going back decades following the end of British colonial rule in 1947. Both nations lay claim to the volatile Jammu and Kashmir region, under Indian administration.

"These are things we have to find solution for between ourselves bilaterally,” ambassador Raghavan added.

Following four wars and a number of military conflicts, India and Pakistan agreed to a ceasefire in 2003, of which both sides accuse each other of violating regularly.

A Kashmir-based separatist organization Lashkar-e-Taiba that challenges India's sovereignty of the region is believed to be behind the 2008 bombings in Mumbai that killed over 160 people.

On Monday, Pakistani Prime Minister Nawaz Sharif expressed confidence that the SCO would play a “role of a catalyst” in enhancing bilateral ties with the neighboring nation.