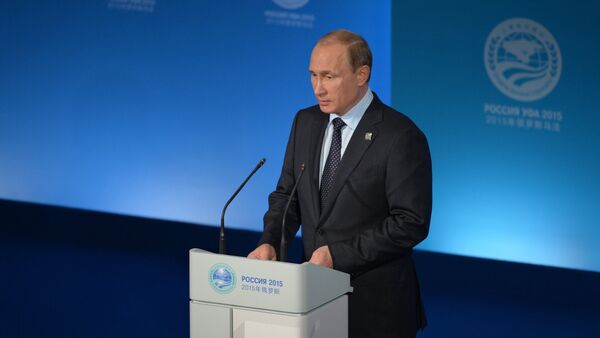 Russian President Vladimir Putin said Friday that improving cooperation in the financial sphere is one of the priority tasks for the Shanghai Cooperation Organization (SCO), and noted the prospects of the project of creating the center of project financing.

"Of the priority tasks is improving cooperation in the finance sphere. We are participating in the work for creation of the SCO development bank and special account. The idea of establishing an international project financing center on the basis of the SCO inter-bank association seems promising," Putin said at the SCO summit.

Ascension Procedure for India, Pakistan into SCO New Stage of Development
Moscow also hopes that the SCO will become a platform to solve international issues, including those with India and Pakistan.

"We hope that the SCO platform will become an extra forum where we will be able to look for compromises and solutions for disputed issues together," Putin said.

"We must solve the issue with full-fledged inclusion of India and Pakistan," the president stressed.

New Delhi and Islamabad entered an ascension process into the political, economic and security alliance with documentation signed earlier in the southwestern Russian host city. The two SCO observer states lodged their admission applications in September 2014.

Speaking on international issues, Putin noted that the large US foreign debt is a serious problem for the entire world economy.

‘#US #debt is a serious problem for world #economy’ – #Putin at #BRICS/#SCO summit http://t.co/BGobRgXh9S pic.twitter.com/SFujjGXNXt

"There is a decline of the rate of growth in the United States. It is well-known that the levels of debt are higher than the levels of GDP there. I'm afraid to be mistaken, but I think that the GDP of the country is $17.8 trillion, while the debt is $18.2 [trillion]. This is a serious issue not only for the United States, but for the entire world economy," Putin said during a press conference.

The US state debt is the highest in the world and the biggest it has ever been. It has doubled since the level recorded at the end of 2007. Since 1960, the US Congress had to act 78 times to permanently or temporarily increase the debt limit, according to the US Treasury Department.

In March, the Congressional Budget Office (CBO) warned that the US government could run out of money by October or November unless the US lawmakers once more act to allow additional government borrowing.

Russia's President said that China remains the engine of the world economy, despite its current issues.

At present, China is facing an economic slowdown.

"I agree with the Chinese estimates, which consist of the fact that in the previous period…there has been a certain downward correction, but the latest data [shows] slight rise again. So there is nothing special here. I believe that China will remain the engine of the world economy," Vladimir Putin said.

Moscow is hoping for substantial contribution of Chinese companies into development of Siberia and Russia's Far East.

"I believe that the Chinese companies could make a substantial contribution to those plans, tasks that we concern ourselves with, [they] could take part in solving them. With profits for themselves, of course," Putin stated.

When asked on the issue of the Iranian nuclear programm, Russia's President said that all negotiators have their own opinions, including on sanctions and  expressed hope that compromise will be found soon.

"We stand for the full scale [anti-Iran sanctions] lifting, as soon as possible, because we do believe that it is not the right way to solve international questions and issues. All of the participants of those talks have their own opinion, compromise must be found. I believe it will be found in the near future," Putin said in a press conference.

"I hope that everything will end in the nearest future by the signing of essential documents and coordination of guarantees, which are very important, I believe," Putin added.