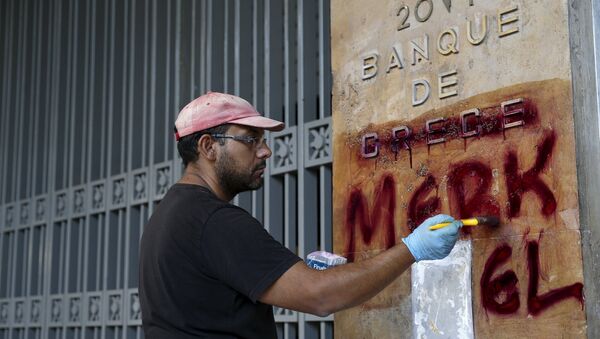 © REUTERS / Yannis Behrakis
Subscribe
International
India
Africa
On Friday, the Greek parliament is due to decide on giving the country's government the mandate to conduct talks with international creditors regarding a proposed cash-for-reform deal.

Greek Referendum Signals Failure of German Leadership in Europe – Analyst
Friday evening will see a snap vote in the Greek parliament, earlier announced by the country's Prime Minister Alexis Tsipras, who wants the MPs to support government talks on a new round of austerity measures worth a total of 13 billion euros, media reports said.

On Thursday night, a 13-page document was delivered to all three creditors and Jeroen Dijsselbloem, the president of the euro group of finance ministers.

The proposed plan stipulates slashing a whole array of privileges, such as pensions, tax breaks for Greece's islands and military spending in exchange for a three-year loan deal worth 53.5 billion euros, aimed at saving the country from bankruptcy and resuscitating its economy.

The new reform plan is due to be approved by the Greek parliament during a separate vote.

On the budget, the government vowed to adhere to its primary surplus targets in the next three years, which will stand at 1 percent, 2 percent and 3 percent in 2016, 2017 and 2018, respectively.

As for new tax levels, those worth mentioning include a 23-percent value added tax on restaurants and catering, as well as a reduced 13-percent tax on basic foodstuffs, energy hotels and water; also, these include the so-called 'super reduced' 6-percent tax on pharmaceuticals, books and theater tickets.

On pensions, the new plan stipulates phasing out the solidarity grants for the poorest pensioners by December 2019 and raising the retirement age to 67 by 2022.

Greece in Crisis? Just Sneer at It!
Public sector-related measures include, among other things, the introduction of a plan to make it easier to reassign public sector workers to different posts wherever they are needed.

Separately, the government plans to privatize the electricity grid company, regional airports, as well as the ports of Pireaus and Thessaloniki.

Meanwhile, Nikos Filis, spokesman of the ruling Syriza party, has made it plain that the parliament will probably say "yes" to the government's intention to carry out negotiations with creditors on the proposed reforms.