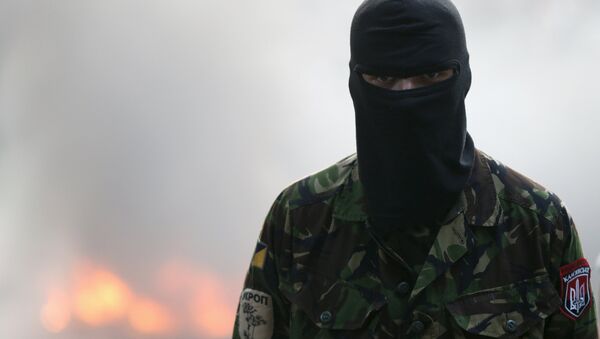 © REUTERS / Valentyn Ogirenko
Subscribe
Ukrainian volunteer battalions have reportedly refused to leave the village of Shirokino in eastern Ukraine, which had been declared a demilitarized zone.

Donetsk People's Republic Announces Demilitarized Zone in Shirokino
Representatives of Ukrainian volunteer battalions have expressed disagreement with the demilitarization of the village of Shirokino in eastern Ukraine, saying that they will not withdraw from the area, according to a daily report by the Special Monitoring Mission of the Organization for Security and Cooperation in Europe (OSCE).

The report also referred to the Right Sector, a radical Ukrainian political movement, citing its unwillingness to comply with a possible governmental order to pull out of Shirokino.

For their part, representatives of the National Guard Donbas volunteer battalion said that they had not received orders to withdraw, according to the report.

On July 1, the authorities of the self-proclaimed Donetsk People's Republic unilaterally declared a demilitarized zone.

Denis Pushilin, chairman of the republic's Supreme Council Presidium, said that the decision on the demilitarization of Shirokino had been made by the republic's authorities "as an act of goodwill and a demonstration of peaceful intentions."

The demilitarization plan stipulates that the conflicting parties withdraw their troops to a distance of 2.5 kilometers from the front line; tanks with 100mm guns as well as 85mm mortars should move back to a distance of 15 kilometers, under the plan.

Kiev was quick to describe the Donetsk People's Republic's decision to demilitarize Shirokino as an attempt to cover their retreat. 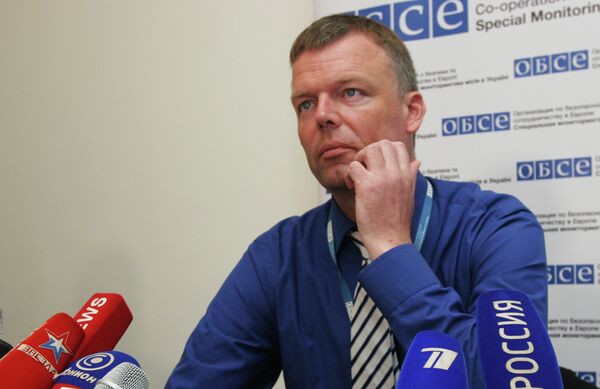 During their visit to Shirokino on July 4, OSCE observers specifically noted the absence of pro-independence supporters and local residents in the village. Alexander Hug, deputy head of the OSCE Special Monitoring Mission, said that all of the fortifications, checkpoints and private houses have been abandoned, and that the village has been 80 percent destroyed.

Poroshenko Makes Donbass Increasingly Hate Ukraine – German Media
Located between the towns of Mariupol and Novoazovsk, Shorokino has become one of the hottest spots in the conflict zone in eastern Ukraine's Donbass region in the past few months.

Fighting in Shirokino showed no sign of abating, even after the Normandy Quartet of Russia, Ukraine, Germany and France in February signed an agreement on the settlement of the situation in the Donbass region, which specifically envisages a ceasefire and the withdrawal of heavy weapons from the front line.