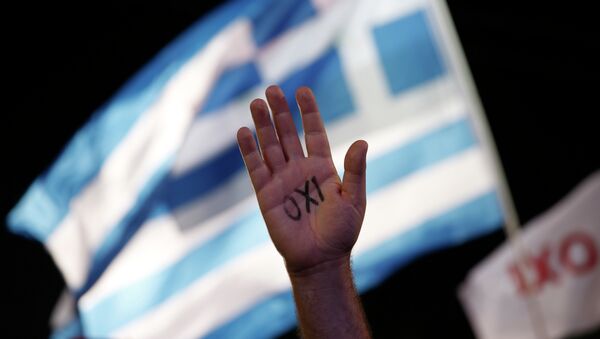 © AP Photo / Petros Giannakouris, File
Subscribe
International
India
Africa
Russia, the United States and China want Greece to stay in the Eurozone, but none of them are willing to offer the country direct financial aid, Gregory Papanikos, president of the Athens Institute for Education and Research, told Sputnik.

WASHINGTON (Sputnik) — Some $270 billion of Greece's aggregate debt is owed to its three key creditors — the European Union, the International Monetary Fund and the European Central Bank. Last Tuesday, Greece missed a payment deadline for $1.7 billion to the IMF as part of its last package, rendering the existing deal expired without possibility of extension.

“Greece's economic future is within the Eurozone and, of course, in the European Union (EU). If Greece exits these two important organizations, it would become less important as an economic entity for all the big countries of the world: the United States, Russia and China.”

At first, the new Greek left-wing government of Prime Minister Alexis Tsipras did not understand “this important strategic point,” Papanikos added. However, that crucial message had been made clear to Athens, he continued.

"My feeling is that all three countries made clear that they want Greece in the Eurozone. Only then Greece is important for them economically and politically.”

Tsipras and his government also had to recognize the reality that for their different reasons, neither Russia nor the United States was prepared to help them in any financially significant way, the expert said.

“This is the crux of the matter: The United States talks too much but [takes] no economic action.”

The Obama administration had steered clear of any participation in the Greek bailout program, Papanikos added.

“The United States asks the Germans to pay the Greek debt, but they are mute when they are asked to help. US companies are doing nothing in terms of Foreign Direct Investment. Again, [there is] too much talk on helping the Greek economy but few things are delivered.”

The Russian government was following a parallel policy, Papanikos continued.

“On the same token, Russia is not doing any better on that.”

Similarly, the US government had not proven helpful in trying to encourage Greek tourism during the crisis even though Greece relies on tourism.

“Not only they do not invest in this promising sector, but their media overexpose the Greek events scaring away from Greece the American tourists. As a matter of comparison, Russia is doing much better in this area.”

However, Russia and the United States were united in wanting Greece to remain stable, the expert added.

“Russia wants a stable Greece within the euro and the European Union, because it is a different voice for Russia's political concerns. It seems to me that an unstable Greece is detrimental to both the United States and Russia, even though for different reasons.”

Papanikos also pointed out that fears the crisis would spread and destabilize other European economies and global prospects had proven groundless.

“From an economic point of view, Greece is a very small country and has little effect on free trade talks.”

Many people are expecting a crash on world markets from a Grexit, a Greek exit from the euro, but quite the contrary has happened, Papanikos concluded.