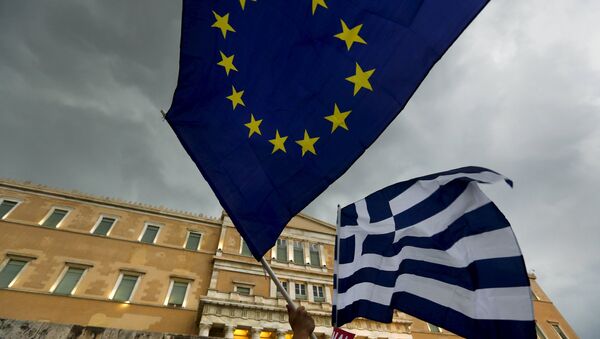 The German public is "bombarded" with daily news blaming Greece for the failure of an agreement and the subsequent default on its payments to its European and international lenders, a German lawmaker told Sputnik on Thursday.

MOSCOW (Sputnik), Alexander Mosesov – Athens continues to attempt to settle a longstanding dispute over the next leg of EU-IMF bailout in exchange for unpopular social reforms and economic austerity measures that are demanded by its creditors. Greek Prime Minister Alexis Tsipras has until the end of the day to submit his proposals, which will be reviewed at an extraordinary summit on Sunday.

Alexander Neu, member of the German parliament (Bundestag) from the left-wing Die Linke party and member of the Bundestag Defense Committee, says Berlin has been "very successful in blaming Greece for the situation."

"Many people in Germany believe this, they get the media every day, and they get a real bombardment of wrong propaganda statements."

IMF Managing Director Christine Lagarde reaffirmed the institution’s recent assessment that Greece’s debt, estimated to stand at around $350 billion in total, is not payable without significant restructuring.

In Sunday’s referendum asking the Greek public to weigh in on lenders’ cash-for-reforms proposals, over 61 percent of the population voted "no." The vote result has been represented by European officials and their locally-based media as a decision for Athens’ potential exit from the eurozone.

"The left party is not supporting a Grexit but what we would like to have is a haircut of debts. The Greek economy is not able to recover without a haircut."

Some $270 billion of Greece’s aggregate debt is owed to its three key creditors – the European Union, the International Monetary Fund and the European Central Bank. Last Tuesday, Greece missed a payment deadline for $1.7 billion to the IMF as part of its last package, rendering the existing deal expired without possibility of extension.

A glimmer of hope for those who wish Greece to stay within the Eurozone appeared earlier this week with Tsipras’ official request for a loan within the European Stability Mechanism.