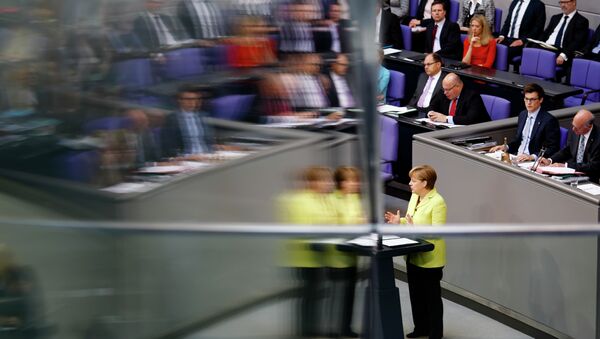 MOSCOW (Sputnik), Alexander Mosesov – The Russian Foreign Ministry has for months expressed concern over what it terms Russophobic rhetoric perpetrated by "knights of the Cold War" still active in the governments of the United States, Europe and the Baltics. At issue is Western media’s portrayal of the conflict between government forces and independence militias in southeast Ukraine as a war with Russia, which Moscow insists is Kiev’s internal matter.

Alexander Neu, member of the German parliament (Bundestag) from the left-wing Die Linke party and member of the Bundestag Defense Committee, says anti-Russian sentiment is prevalent among the country’s newsmakers.

"In the political elite and in the media, there is, in my perception, more or less a Russophobic position."

The German lawmaker contrasted that with his explanation of realities on the ground, saying that German society reserves its prejudices.

"They are more skeptical and they are more interested in having calm relations with Russia… The political elite, the media elite is pushing confrontation against Russia."

Late last month, the European Union’s foreign policy chief Federica Mogherini introduced an EU-wide media strategy to counter what it deems Russian "propaganda." A nine-page action plan drafted by the EU foreign service said part of the strategy, a unit called East StartComTeam, is expected to be up and running by September.

An ICM poll published in April revealed that some 54 percent of respondents in the United Kingdom, France, Germany and Greece said they did not trust mainstream media when it came to coverage of the Ukrainian crisis.