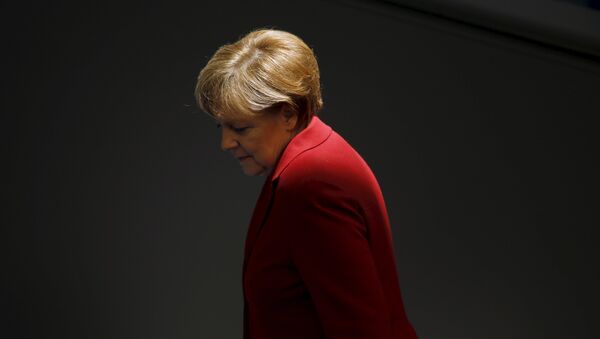 Greece: The Eurozone Austerity Experiment
In an article published Wednesday in The Interpreter, the journal of the Sydney-based Lowy Institute for International Policy, Danish historian and foreign affairs analyst Matthew Dal Santo argued that Berlin's insistence on harshly punishing the debt-ridden Greeks has only intensified the economic crisis in Athens, leading to a crisis of confidence in German leadership in Europe.

Commenting on the Greek referendum, where "the people have voted (once again) for an end to self-defeating austerity imposed from abroad," Dal Santo noted that despite its many economic and financial "sins," Greece was not entirely responsible for the catastrophic economic conditions it presently faces.

Dal Santo argued that Greece's decline into economic and financial oblivion was brought about not by the country's "failure to stick to the medicine meted out to it, but the medicine itself."

The analyst recalled that "even the IMF questioned the remedies ceaselessly recommended. But Germany, above all, insisted. In the middle of a global recession unprecedented in severity since the 1930s, there would be drastic cuts to pensions and welfare spending; an admittedly bloated public sector would lose thousands of jobs; the rights and conditions of those still in work would be dramatically eroded; national assets would be sold off at fire-sale prices. What's more, Berlin would do nothing to stimulate demand at home or elsewhere in the Eurozone to compensate for its collapse in the Aegean. On the contrary, Germany, with a trade surplus greater than China's, would make a budget surplus a requirement under federal law."

Merkel Tired and Overwhelmed, Unable to Prevent EU Collapse – German Media
Pondering how the Greek crisis spiraled out of control and ended up at the point where it is today, Dal Santo argued that the character of the German Chancellor, Berlin's erroneous equation of foreign policy  with domestic preferences, and the country's inability to compromise even when its own interests were at stake are to blame.

Recalling earlier media praise for Chancellor Merkel's analytical mind, her "scientific detachment," "reticence," and "foresight," Dal Santo pointed out that when it came to Greece, Merkel took a country genuinely needing reform and led it, together with Europe, "to the brink [of crisis], by failing to see what should have been obvious from her much-vaunted reading of German history: that cutting public spending in the middle of a global recession to satisfy the demands of foreign creditors would create the depression-like conditions that have been a boon for political extremists."

Furthermore, the analyst noted that Merkel's tough stance on Greek austerity was based on confusing domestic policy for foreign affairs. Widely popular in Germany for her reputation as a monetary and fiscal "disciplinarian," Merkel is "perfectly in tune with Germans' perception of debt as a sign of moral failing, the legacy of a Lutheran mentality compounded by the still traumatic memory of 1930s Weimar hyperinflation and the red carpet it laid for the Nazis."

However, as Dal Santo points out, German attitudes toward debt are not only inconsiderate of other nations' experiences; they also fail to account for the country's own, relatively recent history. Citing French economist Thomas Piketty, Dal Santo notes that in 1955, "saddled with the costs of two world wars, West Germany was itself the recipient of the kind of debt relief that Germans would deny Greece today," with "its late enemies, including Britain, France and Greece [writing] off half the national debt."

In this regard, according to Dal Santo, the tragedy for Greece and Europe "is that Germany's instincts are stronger than its memories. Germany's tragedy (and Germany will suffer too from this debacle) is that German's own interests could only be defended by acting in contradiction to their supposed national values and perceived…history."

Balancing the Bloc
In the analyst's view, Merkel's mistake with respect to Greece stems from her failure to show flexibility toward a foreign policy approach which "would be rejected as wrong or unjust in a domestic setting." In the expert's view, "the resolution of the Greek debt crisis demanded the domestically indefensible: debt forgiveness or its mutualization through the issue of common 'euro bonds'; looser Eurozone interest rates and looser German fiscal policy; and the initiation of a serious movement toward a more complete fiscal and political union."

"If Germany's mistakes with regard to Greece have a single cause," Dal Santo notes, "it is that the country has misidentified a foreign-policy problem as one of domestic policy, and erred in its remedies accordingly."

In his article, Dal Santo pointedly asked whether Merkel's failings, and those of Germany's political and economic class, may have something to do with the country's possible unpreparedness to become Europe's economic and de-facto political leader following unification. Noting that both West and East Germany struggled with the creation of an independent foreign policy prior to 1990, the analyst asked where Chancellor Merkel, and the German people as a whole could have been expected to learn "the principles of sound foreign policy."

"From the start," Dal Santo notes, "Merkel has been committed to making sure that Germany's domestic experience of the euro crisis was for all intents and purposes the only relevant experience of the crisis at a European level." Noting that this strategy has been successful in "ensuring her domestic popularity," Dal Santo believes that the policy "was disastrous when it came to ensuring Germany's long-term interests."

'A Defeat of German Leadership in Europe'

EU May Still Seek Compromise Deal With Greece
Ultimately, whether Greece reaches a new deal with its creditors, or Athens defaults and leaves the Eurozone, Dal Santo believes that the Greek referendum signals "a defeat of German leadership in Europe…For that leadership will have been shown to rest not on consent or voluntary submission to a strong Germany claiming to act in the interests of all, but on force and the threat of economic Armageddon."

Citing Henry Kissinger, who sees power (what is considered possible in international relations) and legitimacy (the perception of what is just) as "the two inseparable elements of a stable international order," Dal Santo noted that "in a classic miscalculation of its own interests, Germany has traded legitimacy for power, [and] there's no going back now."