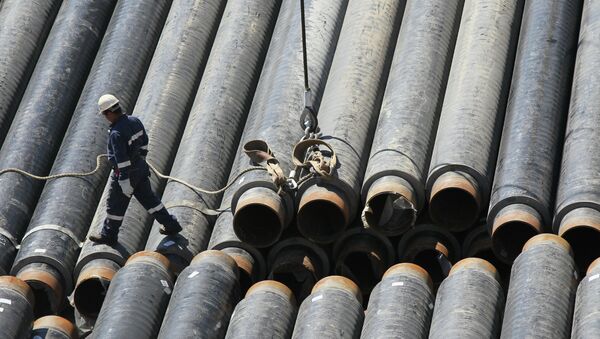 © Sputnik / Alexey Kudenko
/
Go to the mediabank
Subscribe
International
India
Africa
The energy company announced on Wednesday that it has canceled a contract with Italian contractor Saipem to build the first section of the pipeline under the Black Sea, which had been reached during negotiations to construct the South Stream pipeline in 2014.

"In the near future South Stream Transport B.V. will enter into negotiations with potential contractors to lay the first segment of the 'Turkish Stream.'"

According to South Stream Transport, in which Gazprom gained 100 percent ownership in December 2014, after buying shares from minority shareholders (the Italian company Eni, Wintershall of Germany and EDF of France), the decision was reached due to a failure to come to an agreement on a range of working and commercial issues related to the project.

Russia
Russian Gas Supplies Germany With up to 30 Percent – Gazprom
Saipem had been due to begin laying the first pipeline, beginning at the Russkaya Compressor Station near Anapa in Russia, at the beginning of June; construction of the line is planned to be finished in December 2016.

The contract with Italian energy engineering Saipem, in which Eni has a majority stake, to lay the first length of the gas pipeline was agreed upon in March 2014 as part of negotiations for the construction of the South Stream project, which came to an end in December 2014 after the failure of negotiations with Bulgaria to run the pipeline across its territory.

On December 1 2014 it was announced that Gazprom had signed a deal with the Turkish company Botas Petroleum Pipeline Corporation to construct the Turkish Stream pipeline, running across the Black Sea to Kiyikoy on the Turkish coast. The pipeline will have an annual capacity of 63 billion cubic meters of gas, and will have a delivery point at Luleburgaz in Turkey for Turkish customers, and an additional delivery point at the Ipsala border crossing between Turkey and Greece for European customers.