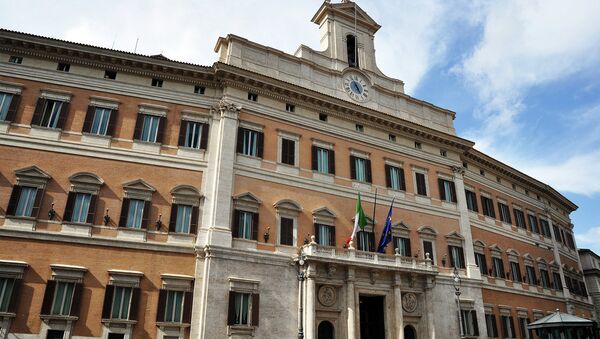 The upper house of the Italian parliament rejected a proposal for an urgent discussion of a bill allowing a referendum on the adoption of a new national currency to replace the euro, Italian media reported Wednesday.

MOSCOW (Sputnik) — The opposition party Five Star Movement (M5S) put forward the proposal on July 5, following the Greek referendum in which over 61 percent of the Greek public voted "no" on whether the country should accept its creditors demands for spending cuts and tax increases in exchange for another loan.

According to newspaper Il Fatto Quotidiano, only representatives of the eurosceptic Northern League party were in favor of the proposal in the Senate.

"PD, Forza Italia, NCD, Conservatives and Reformists, they are all united against democracy and terrified of giving citizens a say," M5S was quoted as saying by the newspaper.

Earlier in June, M5S leader and founder Beppe Grillo demanded Italy's exit from the eurozone. The party filed a petition with 200,000 signatures in support of the move, calling on the Italian parliament to discuss a bill to hold a public vote on the issue.

The eurosceptic M5S party is the main opposition force in Italy, holding 91 out of 630 seats in the Italian lower house of parliament, and 36 out of 315 seats in the upper house.

Holding a referendum on the future of the single European currency in Italy was one of M5S's key election promises.