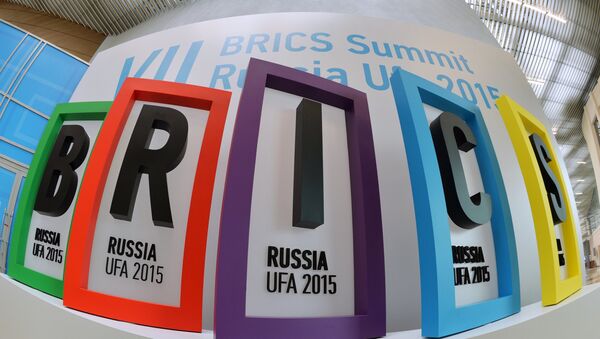 © Host photo agency
/
Go to the photo bank
Subscribe
Tiberio Graziani editor-in-chief of 'Geopolitica' spoke to Sputnik in an exclusive interview sharing his views on the summit of BRICS and SCO. According to him as Europe is facing economic uncertainty due to Greece and the Eurozone, the world's economic center is increasingly moving towards the East.

Tiberio Graziani, President of the Institute for Geopolitical Studies and the editor-in-chief of ‘Geopolitica’, spoke to Sputnik Italia regarding the BRICS summit in Ufa.

“It is a historic moment for the world economy. At a time when Europe is trembling with apprehension and uncertainty due to Greece and the Eurozone, the economic center of the world is increasingly moving towards the East,” said Graziani.

Pivotal Moment: What Does India, Pakistan Membership in SCO Mean?
“The Russian city of Ufa welcomes the summit of BRICS and SCO with President Putin leading the BRICS through a new economic order.”

The editor-in-chief further told Sputnik in an exclusive interview that this moment is of historical importance. As Europe is going through financial and economic crisis around Greece, the setting up of this bank which is aimed at developing infrastructure projects is a “phenomenon of historic significance.”

“The bank infrastructure gives an incentive to the economy of all countries that are involved in this case, especially the economies of the BRICS countries. There is also the Chinese Development Bank. This summit is also important in terms of geopolitics: as you know, sanctions were an attempt to drive Russia into a corner, but that did not happen,” Graziani told Sputnik.

The simultaneous summit of the BRICS and SCO summit in the Russian city of Ufa represents the loss of the West’s role as the center of the world in the field of economics and geopolitics.

Graziani stressed that, “Coming back to the situation with Greece. We can assume that from now on countries facing economic difficulties will put their hopes in these new geo-economic associations. Objectively speaking the center is increasingly shifting from the West to the East, and this shift should be taken into account. Probably most economically vulnerable countries either in a direct or indirect way will start joining these structures.”