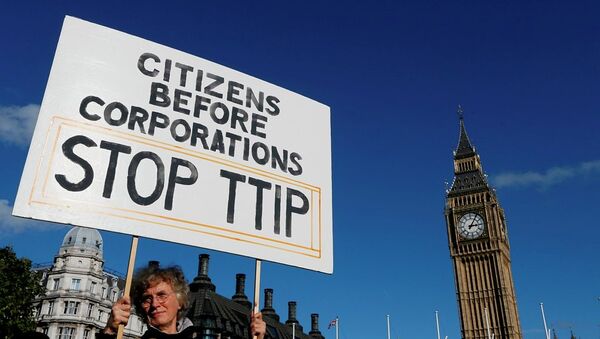 © AP Photo / Kirsty Wigglesworth
Subscribe
The European legislature voted earlier in the day in support of the Transatlantic Trade and Investment Partnership (TTIP) by 436 to 241, with 32 abstentions. Although lawmakers do not directly negotiate with Washington, they can propose changes or veto the final text.

MOSCOW (Sputnik) — The eurosceptic United Kingdom Independence Party (UKIP) has rebuked the European Parliament’s endorsement of a resolution on the trade deal between the European Union and the United States on Wednesday.

"This is a very damaging vote by MEPs which will hurt free trade and the financial well-being of patients, consumers and workers," UKIP trade spokesman William Dartmouth said in a statement.

Controversial TTIP Deal to Progress After Europe Votes Yes
His amendment to exclude the NHS from the upcoming treaty was defeated by a 142-to-507 vote.

In a recent interview with Sputnik, UKIP spokeswoman for small business Margot Parker expressed concern that TTIP would lead to NHS privatization.

A draft, leaked in February, of EU’s "initial offer" in the TTIP negotiations authorized US health corporations to sue governments if lawmakers sought to renationalize for-profit services operating within the NHS.

Negotiated in unusual secrecy for the past two years, TTIP is designed to allot undue power to multinational corporations and other copyright holders, with a specific clause permitting them to sue governments.

Other concerns over TTIP include the removal of local control of trade legislation and copyright from sovereign nations.