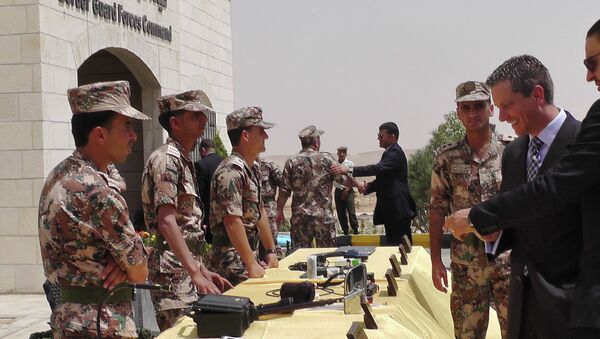 The US sent sensors, communications, command and control equipment to Jordan to help the country guard its borders with Syria and Iraq.

US-Jordan Defense Bill Strong Message of Support to Middle East - Lawmaker
WASHINGTON (Sputnik) — Jordan has received advanced sensors, communications, command and control equipment as part of a $79 million deal to bolster its border security against the turmoil in Syria and Iraq, US defense contractor Raytheon said in a statement on Wednesday.

“The contract included the delivery of key command, control, communications, and surveillance capabilities to the Jordanian Armed Forces” to help secure its borders with Syria and Iraq, Raytheon said.

The provision of radars, infrared cameras, communications, rapid reaction vehicles, and command and control software comes as the United States and Jordan expand military cooperation in the region.

The Great Wall: Israel to Build Security Fence on Border With Jordan
On Tuesday, the US House of Representatives passed a bill that would provide Jordan for a three-year period expedited military sales similar to NATO members and other US allies such as Israel, South Korea and Australia.

More than 600,000 Syrian refugees currently live in Jordan, according to the United Nations. The country is playing a leading role in the anti-Islamic State coalition after the terrorist group burned to death one of its pilots in December 2014.