Theater of the European Parliament: All Eyes on Tsipras 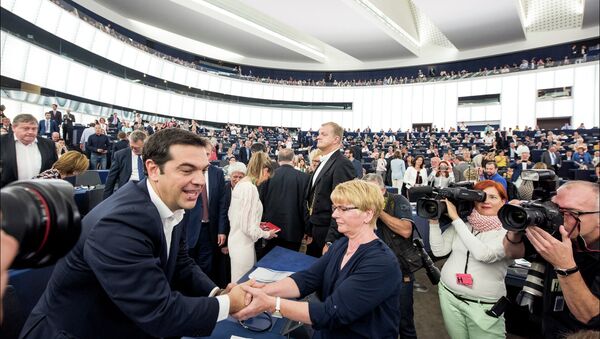 © Flickr / European Parliament
Subscribe
International
India
Africa
Greek Prime Minister Alexis Tsipras has taken to the European Parliament stage in Strasbourg to say he has been given a mandate from his people to "redouble our efforts to get a socially just and economically sustainable solution to the Greek problem without repeating the mistakes of the past, which condemned the Greek economy."

Tsipras was met with applause after his speech in which he praised the courage of the Greek people and pledged to continue to negotiate with Europe.

"The courageous response by the Greek people at a time when there was such pressures with the banks closing, with the campaigns in the media terrorising them into feeling that a No means an end to talks with Europe and end to negotiations with Europe," said Tsipras.

"This is not a decision of breaking off negotiations with Europe, it’s one of going back. It’s a return to the informing principles, the founding principles of European unification."

But stealing the show was Britain’s MEP Nigel Farage whose red-faced rhetoric divided the audience.

"What we’re seeing in this chamber this morning and indeed across the whole of Europe is irreconcilable cultural differences between Greece and Germany, a split between the north and south of Europe. The European project is actually beginning to die."

"The continent is divined from north to south, there is a new Berlin Wall — and it’s called the Euro."

Adressing Alexis Tsipras directly, Nigel Farage said Greece "should never have joined the Euro. The big banks, forced you in and when the bailout began – they bailed out the French, German and Italian banks. They haven’t helped you at all."

"Sir, you cannot have your cake and eat – if they give you more, they have to give other EU countries more. You should lead the Greek people out of the Eurozone with your head held high. You will recover."

Farage sat down to a rousing applause from some members of the European Parliament.

The #EPlenary debate on #Greece continues. Join the discussion on our @Europarl_EN subreddit! http://t.co/ceGwcEPApq pic.twitter.com/7UnZDb097u

Tsipras stared straight ahead while dramatic speeches were delivered by MEPs.

Also lavishing Tsipras with praise was Matteo Salvinini, Italian Nationalist, who referred to Europe as a "cage".

"The ceiling is falling in. Thank you, Mr Tsipras and the Greek citizens, who with such guts wanted to break out of this cage. I don’t want to leave my children in the hands of people who do not respect democracy."

And I am sure that we're all aware of-& we'll all take into account-our historic responsibility. Thank you. #Greece #EPlenary #olomeleiaEK

But not impressed with the proceedings was Polish Center Right MEP Jan Olbrycht, who said inviting a Prime Minister to discuss a crisis at the European Parliament sets "a certain precedent."

"It is a political mistake to organize it this way."

British Conservative MEP Ashley Fox used the political setting to address Tsipras directly, accusing him of knowing that Greece has to lose the euro "but you don’t want to admit it".

"You should organize an orderly exit from the euro."

Bursting with resentment for the euro, Czech Eurosceptic, Petr Mach told Tsipras: "I bow to you; you have let the people make a democratic decision. Other politicians should allow their citizens to decide. Put the question to the Germans, to the Slovaks, to the Finns.

"You will become competitive again, your economy will be thriving and your people will find more work."

"Game over Mr Tsipras. You didn’t want to trust Junker who held out Europe’s hand. There is no room for ideology at the table."

"The Greek people and tax payers will lose out."

"If this was the theater, you would be a tragic example of hubris."

But Prime Minister Tsipras remains hopeful that he will reach an agreement in interests of both the Greek people and the Eurozone.