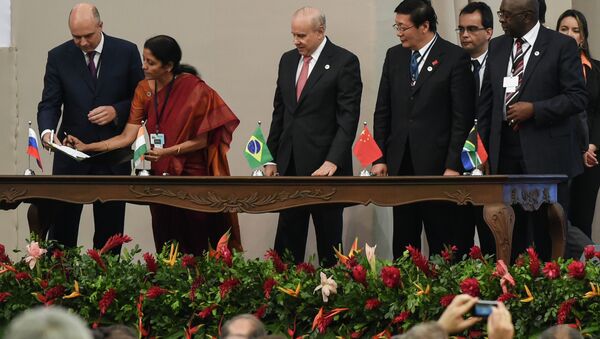 © AFP 2023 / YASUYOSHI CHIBA
Subscribe
International
India
Africa
Greece welcomes the possibility of joining the BRICS New Development Bank (NDB) but there is still a lot of work that needs to be done before this can happen, Greek Deputy Defense Minister Costas Isychos told Sputnik on Tuesday.

Greece Can Join BRICS as a Growing Economy - Official
ATHENS (Sputnik), Anna Liatsou — In May, Russia invited Greece to become an NDB member, with discussions on Athens' membership in the bank expected to take place at the July 8-9 BRICS summit in Russia.

"If that is to happen between Greece and the BRICS within the Development Bank of the BRICS it’s good news. But we still have a lot of work to do to see the details of this agreement and the results of that," Isychos said.

The agreement on the creation of the New Development Bank was signed on July 15, 2014, at a BRICS summit in Fortaleza, Brazil. The NDB’s main purpose is to finance infrastructure projects and sustainable development in BRICS nations and in other emerging economies around the globe.