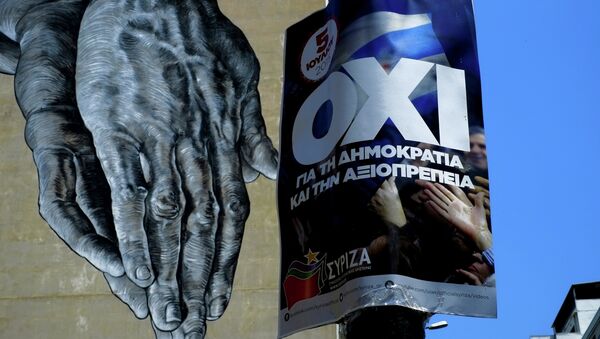 © AP Photo / Petros Karadjias
Subscribe
The referendum showed Greeks' will to stay in the Eurozone on equal terms with the other members, Costas Isychos told Sputnik.

Opening New Page in History: Greferendum Celebrations
ATHENS (Sputnik), Anna Liatsou — The results of the bailout referendum show that Greece will stay in the Eurozone but not as a second-class member, Deputy Defense Minister Costas Isychos told Sputnik Tuesday.

On Sunday, more than 61 percent of Greeks voted "No" to the lender-proposed bailout deal, comprising a set of austerity measures, including pension cuts and tax increases, in exchange for a new financial aid package for the country.

The deputy defense minister added that the "no" vote is also a message of democracy and the sovereignty of the Greek nation "against all those who believe that Greece can become a neocolonial region in the South of Europe."

'Much Work Needed' Before Greece Joins BRICS Bank - Deputy Defense Minister
Greek Prime Minister Alexis Tsipras will make a proposal during the upcoming emergency Eurozone summit that will clear the way to reaching a successful bailout deal between the debt-ridden country and its international lenders, Costas Isychos told Sputnik.

On Tuesday, an emergency Eurozone summit and a meeting of the Eurogroup will take place to discuss the results of Sunday's referendum in Greece and it is expected that Athens will unveil new bailout proposals.

“Well, today's summit of the European leaders is of great importance since our Prime Minister will present a presentation, he will present a formula that will open the road for a successful negotiation and a successful agreement,” Isychos said, just hours before the emergency meeting on the Greek crisis.

The official emphasized that European institutions have to be responsible for the future of the European people and the European Union.

Athens expects a mutually beneficial agreement with its international creditors, but will not accept a memorandum associated with "social genocide," Costas Isychos told Sputnik.

"The word 'memorandum' does not exist within our political vocabulary, because that word has in its context politics or social genocide, neoliberal politics…We are hopeful of an agreement that will be mutually beneficial for Greece and for all the member states of the European Union," Isychos said.

In 2010, Greece and its international creditors — the European Central Bank (ECB), the International Monetary Fund (IMF) and some Eurozone nations — signed a memorandum of understanding on financial aid to the debt-ridden country.

Chances of Greece Leaving Eurozone Below 50% - Russian Minister
Under the memorandum, Greece was obliged submit to highly-unpopular austerity measures stipulated by the contract in exchange for financial aid, the result of which was a 26-percent drop in GDP and a 40-percent decline of household income.

Greece owes about $270 billion to the IMF, the ECB, and the Eurozone countries.

On June 30, Athens defaulted on a $1.7-billion loan repayment to the IMF.

The referendum has renewed fears that Greece might default on its outstanding multi-billion dollar debt and leave the Eurozone, returning to drachma.