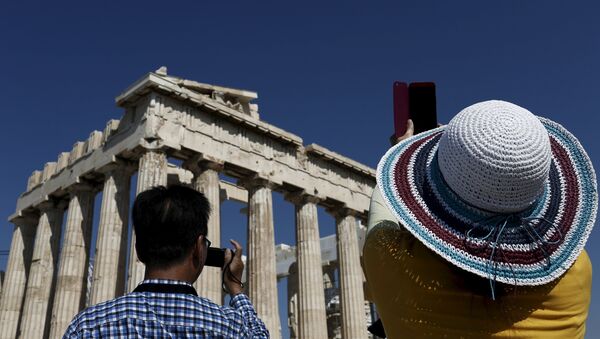 Russia knows about Greece's desire to join the BRICS New Development Bank, but no official discussions have been held yet.

"Signals have appeared in the press, in mass media, that Greece may ask to join the BRICS New Development Bank, we know about it, about these signals. But no one in particular has discussed them on the official level yet," Ushakov said in an interview with RIA Novosti, RT and VGTRK.

The presidential aide stressed that the new bank is only starting to function.

Opening New Page in History: Greferendum Celebrations
"It [the BRICS bank] should still set its practical priorities, start functioning and, of course, it will start its work with its own tasks, its own problems, and not with [the issue of admission of] Greece. But as I said, Greece will be discussed, but not in the context of its engagement, even in the long term, with the new BRICS New Development Bank," Ushakov said when asked to comment on the information that Greece can receive loans for some projects.

The agreement on the creation of the New Development Bank was signed on July 15, 2014 at the BRICS summit in Fortaleza, Brazil. The NDB’s main purpose is to ensure the financing of infrastructure projects and sustainable development of the BRICS countries and other emerging economies.

Earlier this week, Ushakov said that the NDB was open for any country but it was necessary to see first how the bank would function and only then start talking about admitting new members.

Greeks Enthusiastic About Joining BRICS New Development Bank
In May, Russia invited Greece to become an NDB member, with discussions on Athens' membership of the bank expected to take place at the July 8-9 BRICS summit in the Russian city of Ufa.