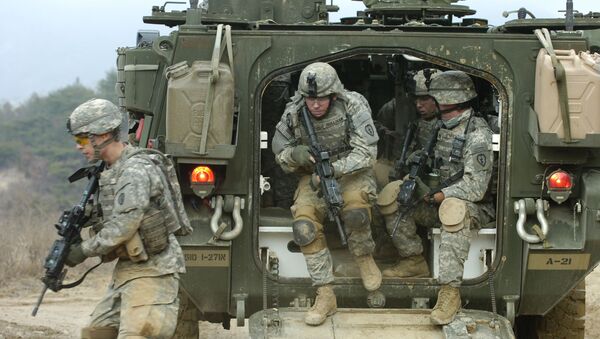 As the US military prepares to launch one of the largest drills in the country’s history across seven Southwestern states, concerns that federal forces - led by the country’s first black president - may be invading Texas are on the rise among residents of that state.

Oh, honey, saying it doesn't make it so. // The Americans are coming! http://t.co/h88llEBpX9 #jadehelm15 pic.twitter.com/M6pJ9X2qla

US Army Terrifies Michigan Town with Surprise War Games
Former Bastrop Mayor Terry Orr believes the reason for the strong reaction to the military exercises is the fact that President Barack Obama is African-American, adding that many residents distrust Obama because of the deterioration of the economic situation in the country, believing the president to be mostly interested in solving the problems of African-Americans and “illegal aliens.”

“People think the government is just not on the side of the white guy,” Orr said.

“Things aren’t as good as they used to be,” said Bastrop’s current mayor, Kenneth Kesselus. “The middle class is getting squeezed and they’ve got to take it out on somebody, and Obama is a great target.”

Are Jade Helm 15 Drills Disguise to Enact Martial Law in US?
Jade Helm first sparked anxiety among Texans when the US military released a map of the planned exercises, showing the territory of Texas colored red and marked as “hostile.”

Military spokesman Lt. Col. Mark Lastoria, in an effort to assuage fears, said designations on the map are part of a fictional scenario.

As he explained, Jade Helm will simulate “US Special Forces helping resistance fighters restore democracy in an imaginary country.” He also suggested that the operation’s logo, which features a Dutch wooden shoe, is reminiscent of anti-Nazi resistance in World War II Europe.