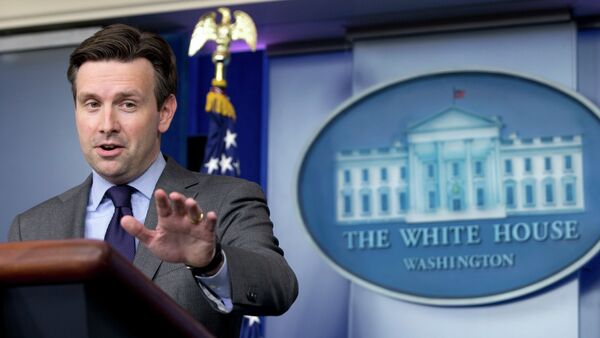 Only implementation of financing reforms will allow Greece to remain part of the Eurozone, White House Press Secretary Josh Earnest said in a briefing on Monday.

WASHINGTON (Sputnik) — The Greek government has been clashing for months with Brussels and its major money lenders in Paris and Berlin, who want Athens to increase taxes and cut welfare spending.

“All parties seem to be publically indicating that they would like to resolve this situation in a way that allows Greece to remain part of the Eurozone. The only way that that will happen is to agree to a package of reforms and financing that will allow Greece to get back on the path of economic growth and debt sustainability.”

“We continue to believe it is in the US interest and in global interest for these differences to be resolved.”

'Red Rag' to Europe: Varoufakis Greek Finance Minister No More
Greece is one of the countries worst hit by the 2008-2009 financial crisis. Its overall debt stands at about $350 billion, $270 billion of which is owed to the European Central Bank, the International Monetary Fund and some eurozone countries.
Newsfeed
0
Access to the chat has been blocked for violating the rules . You will be able to participate again through:∞. If you do not agree with the blocking, please use the feedback form
The discussion is closed. You can participate in the discussion within 24 hours after the publication of the article.
To participate in the discussion
log in or register
loader
Chats
Заголовок открываемого материала