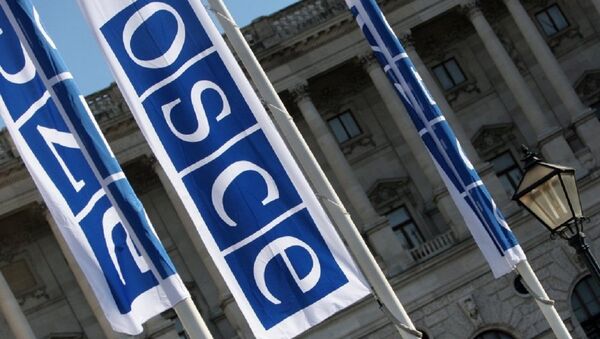 The decision to put the Canada-initiated anti-Russia draft resolution on the Parliamentary Assembly (PA) of the Organization for Security and Co-Operation in Europe (OSCE) agenda after failing to obtain required two thirds of votes is a gross violation of the procedure, the only Russian delegate to OSCE PA said Sunday.

HELSINKI (Sputnik), Svetlana Alexandrova — Earlier in the day, Nikolay Kovalev called for the assembly not to breach the PA protocol by reviewing the draft resolution for the second time after it was approved during the previous OSCE PA session in 2014 in the Azerbaijan’s capital of Baku.

"The Continuation of Clear, Gross and Uncorrected Violations of OSCE Commitments and International Norms by the Russian Federation" resolution accuses Russia of interfering in the Ukrainian crisis and of "unlawful annexation" of Crimea.

Russia has repeatedly dismissed it was to blame for the events in Donbass and stressed that Ukraine coming out of political and economic crisis was in its best interests.

The Russian delegation decided to refrain from participating in the summer session after Finnish authorities had denied travel visas to several members of the Russian delegation set to participate in the OSCE PA, including Russian State Duma Speaker Sergei Naryshkin, who is on the EU travel ban list of persons.