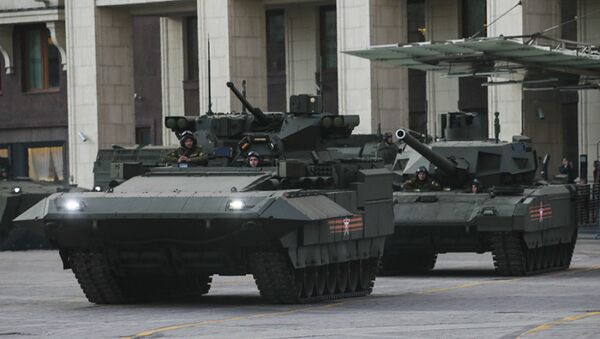 © Photo : Russian Defense Ministry
Subscribe
International
India
Africa
Russia is set to create a new Advanced Combat System suitable for hybrid warfare, based entirely on the Armata Universal Combat Platform, as, according to Russian military experts, the country's new Armata tank and T-15 heavy infantry combat vehicle, which are based on this platform, are the only armored vehicles capable of surviving modern combat.

Russia
Modern Warfare: Russia's T-15, Armata Tank's Younger Brother
Russia is set to develop a new Advanced Combat System suitable for hybrid warfare. two of the elements of the system are already in place: the recently-revealed Armata tank and T-15 heavy infantry fighting vehicle (BMP T-15), which is based on the Armata Universal Combat Platform.

Military experts believe these units are the only ones capable of surviving modern hybrid warfare.

“By the middle of a modern combat, only the Armata tank and BMP T-15 will be left 'alive',” Vyacheslav Khalitov, Deputy Director General of the manufacturing company Uralvagonzavod, told the Russian daily newspaper Nezavisimaya Gazeta.

“We are transitioning to a new ideology of warfighting. Hybrid conflicts are the most wide-spread type of warfare nowadays,” Khalitov said earlier in June.

“This modern warfare necessitates a rapid response.  It is safe to say that Armata-class tanks, along with the T-15 and other state-of-the-art armored vehicles, will become a core of the Advanced Combat System, which will quickly and efficiently resolve any military task,” he added.

Russia's Armata T-14 Tank Sends Shivers Down Washington's Spine
The Armata is one of the most protected, if not the most protected IFV in the world. It seems that in terms of protection it is superior to most heavy armored personnel carrier and heavily-armored vehicles such as German Puma, or Namer, a heavily armoured infantry fighting vehicle based on the chassis of the Merkava 4 main battle tank of Israel, also called Tiger or Leopard.

The new T-15 heavy infantry fighting vehicle, along with the Armata T-14 tank, were unveiled during the V-Day military parade in Moscow.

Both units are based on the "Armata" Universal Combat Platform.

The Armata platform is used in the T-14, the T-15, a combat engineering vehicle, an armored recovery vehicle, a heavy armored personnel carrier, a tank support combat vehicle and several types of self-propelled artillery, including the 2S35 Koalitsiya-SV, which uses the same codename and is based on the same chassis. Russia's military also intends that it serve as the basis for its artillery, air defense, and NBC defense systems.

Hardware to be based on the Armata platform includes:

The Armata T-14 main battle tank, T-15 heavy infantry combat vehicle, BM-2 (TOS-2) short range rocket artillery (similar to the TOS-1 Buratino flamethrower unit), BREM-T T-16 recovery vehicle and 2S35 Koalitsiya-SV self-propelled gun. However, the 2S35's which were put on display during the 2015 Moscow Victory Day Parade and its rehearsals were not actually built on the Armata platform but rather on a six-wheeled platform that appears to be a T-90-derived chassis.