Kiev Can't Get Donbass Back Through Economic Blockade – French Media 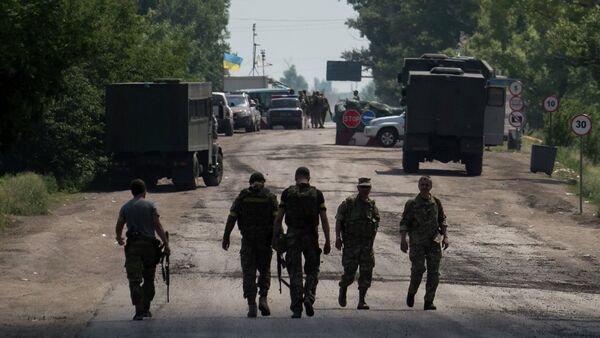 © AP Photo / Evgeniy Maloletka
Subscribe
The Ukrainian government will have no hope of bringing Donbass back under Kiev's control, so long as it continues to pursue the "failed" policy of blockading the area economically, France's Le Figaro writes.

In an investigative report published earlier this week, the conservative French daily noted that Donbass's isolation from the rest of the country has resulted in the doubling of food prices in Donetsk, along with rampant corruption at block posts established by Ukraine's border services. The paper noted that Kiev's present policy is highly unlikely to convince locals that they would be better off with Ukraine.

Le Figaro also noted that Kiev's logic, which calls for blockading the area in the hope that ordinary residents turn against the authorities of the fledgling Donetsk and Lugansk People's Republics, is irrational.

Kiev 'Bans' Crimea and Donbass from Exploiting Their Mineral Wealth
The newspaper recalled that former Donetsk Region Governor Alexander Kikhtenko, who was dismissed last year, was fired precisely over his criticisms of Prime Minister Arseniy Yatsenyuk and Internal Affairs Minister Arsen Avakov's proposals to isolate the territories. Kihtsenko had stressed that the economic isolation of Donetsk would lead to massive corruption at government-established checkpoints, which resulted in Avakov accusing him of "collaborating with the authorities of the occupied territories."

Le Figaro noted that with lorries being held up by border guards and being forced to pay between 150,000-200,000 hryvnia (equivalent to about $7,100-$9,450 US) in bribes, food prices in Donetsk have skyrocketed, resulted in Kiev "losing the hearts and minds" of local residents, and Donbass automatically turning toward Russia, which has become its only source of food, fuel and medicine. The paper notes that even locals who aren't particularly sympathetic toward DPR authorities condemn Kiev's actions.

Le Figaro's investigation confirms what Ukrainian and Russian media have been saying for months now –that Kiev's economic blockade has led to a humanitarian catastrophe in the blockaded territories, while corruption at border checkpoints has skyrocketed.

Business as Usual: Ukrainian Goods Flooding Into Donbass Despite Blockade
Last month, Ukrainian President Petro Poroshenko announced that economic ties with the breakaway republics would be restored only when Kiev restores its control over the border with Russia. Also last month, Poroshenko Bloc MP Yuri Lutsenko called Donbass a "cancerous tumor," adding that the blockade should only be intensified.

Russia has reacted to the humanitarian crisis in Donbass by sending aid convoys to the region. Last month, Russian aid workers delivered their thirtieth convoy, with total aid deliveries provided since August 2014 now amounting to over 37,000 metric tons.