Risk of False-Flagging Greece Into Submission and Chaos? 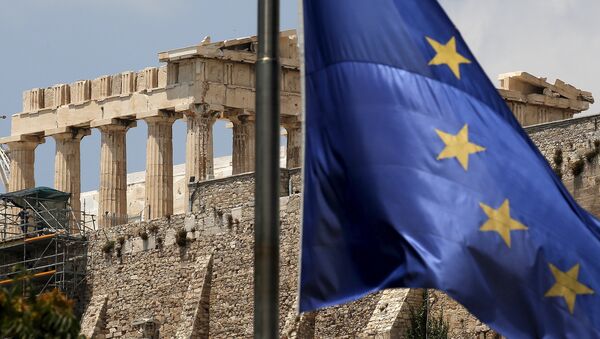 © REUTERS / Yannis Behrakis
Subscribe
International
India
Africa
Peter Koenig
All materials
As we move closer to the 5 July referendum, it becomes clearer every day – Brussels, Washington and Berlin are waging an open “class war” against Greece.

Because the Greek people, the citizens of a sovereign country – the first democracy in Europe, the country that gave Europe her name – these people have had the audacity to democratically elect a socialist government.

Now they have to suffer. They do not conform to the self-imposed rules of the neoliberal empire of unrestricted globalized privatization of public services and public properties from which the elite is maximizing profits – for themselves, of course – it is outright theft of public property.

The weapon is finance; the instruments are the mega-banksters of Europe and Washington. They are like dehumanized missiles. The fight is no-holds-barred – all out, no scruples. The savages of Brussels have the audacity to call for Mr. Tsipras’ resignation in case the Greek referendum rejects the austerity package. – Can you imagine!

IMF Head May Lose Post Due to Greek Crisis
Madame Lagarde, the heartless Iron Lady of the IMF, keeps referring to the Greek government as ‘children’. She keeps asking to talk to ‘adults’ – inferring that what Greece suggests and proposes as an alternative to the killer plan of the troika is mere child’s talk. – What an abject arrogance. And that in the face of senior IMF economists who have already months ago declared that austerity doesn’t work in the case of Greece – and, in fact, in no case. To revive the economy of a country, the economy needs oxygen to breathe, to recover – just the contrary of an austerity program. Austerity is strangulation by debt and suffocation by complete annihilation of a nation’s social safety net.

In the early 2000’s the independent Evaluation Department of the World Bank issued an analysis of structural adjustment and so-called budget support loans of the 1990s around the world. The report was negative throughout. It was an internal report and, as far as I know, never hit the road, i.e. the media. Even as an internal report it disappeared quickly form the Bank’s intranet.

A ‘structural adjustment’ loan is exactly that – a blank check against severe austerity. Austerity doesn’t work. And less so with a heavy debt burden at 6% or 7% interest, money that the ECB generates electronically (as all banks do), lends it to European predator banks in Germany, France – you name it – for 1% or less – which in turn onlend the money at usurious rates of up to 7% to Greece and other which are in the crosshairs of the troika.

Madame Lagarde of the IMF knows it; the Goldman Sachs banker who heads the European Central Bank (sic) knows it – and even in the European Commission there must be some economists who understand 101 of economics.

Conclusion – this is an all-out war – against Greece, against a Government elected by the people to work for the people and while doing exactly that the Government is ambushed by bankster missiles with a threat, if you don’t accept the attack, you, Mr. Prime Minister, better resign.

Eurozone Powers Sure to Seek Regime Change in Greece - Expert
It’s to remain speechless – almost – in the face of this new ‘normal’ against which nobody, no western European Government protests, let alone a Eurozone government. Everybody accepts this terror dictum of Brussels and Washington, even those that may be next. I am naming Brussels first, because they would be the main responsible to stand up in unison for one of their brothers of the Union; but we know quite well that the ‘union’ is a non-union; and that the Europeans are just vassals, spineless vassals and that Washington calls the shots.

The anti-referendum propaganda is also running hot. From the UK, from Germany and even from France – but interestingly not from Greece – ‘the latest’ polls are published, saying that the ‘yes’ vote – for more austerity – is gaining speed, that they are moving even ahead of the ‘no’ vote-intentions. Speculations with false polls have always been an excellent tool to manipulate public opinion – to, in turn, manipulate public balloting. – Who wants to be with the losers?— So, they prepare a field of ‘false’ winners to twist the minds of the people.

Which brings to mind another falsehood – a danger Syriza surely is aware of, the false-flagging into submission and chaos, a cowardice that Washington is well versed in applying everywhere they want ‘regime change’.  They have a lot of practice throughout the world acquired during the last 100 – 150 years; yes – that long. A former CIA agent recently admitted that virtually all ‘terror’ attacks on US soil during the last 15 years, including 9/11,  and most of those around the globe were false flags.

Imagine – Greece votes “No” to the austerity – as they should – the EU may or may not expulse them form the Eurozone, as Germany has everything to lose. Expulsion would be totally illegal, mind you – but there are no international laws that have any value in the face of the unelected super-monster construct of the current neoliberal reign over the western world.

With a ‘no’ Greece may even decide exiting the murderous Eurozone by themselves – returning to the drachma – nationalize the banks and start a recovery program with a banking system that actually works for the Greek economy not for the pockets of some white collar thieves in the upper gremia of faraway globalized banksters.

Greece vs EU vs IMF: Debt Relief Calls Show Cracks in Creditors' Alliance
The masters of the universe wouldn’t like that – at all. Especially in a country that hosts the key NATO base in Europe. Socialism and NATO do not go hand-in-hand. What to do? – Washington’s one-fits-all recipe may do – a false flag attack on, say the NATO base, the US embassy, or the German embassy – or anywhere else where the interests of slave-drivers are at stake. With the bought support of the western presstitute media, they may pretend the Greek have carried out the attack – and soon they may construct an argument whereby foreign troops will have to invade Greece to protect ‘the foreign’ interests. The first step towards chaos. Look at Ukraine – look at the entire Middle East – no need to list them all the countries which were false-flagged into submission. But don’t be intimidated.

This should not happen in Greece; a strong-willed people, the cradle of democracy and of Europe – and supported by a strong military – a perfect reason not to cut the military budget, as demanded by the troika.

As I suggested many times before, there are bright prospects ahead for Greece after stepping over this nefarious threshold of the Eurozone and taking government back in her own reign – practicing democracy and being free to deal and trade with whom they please, also with the East – which is –according to all common sense where the future for economic development lies.

Peter Koenig is an economist and geopolitical analyst. He is also a former World Bank staff and worked extensively around the world in the fields of environment and water resources. He writes regularly for Global Research, ICH, RT, Sputnik News, TeleSur, VNN, Vineyard of The Saker Blog, and other internet sites. He is the author of Implosion – An Economic Thriller about War, Environmental Destruction and Corporate Greed – fiction based on facts and on 30 years of World Bank experience around the globe. He is also a co-author of The World Order and Revolution – Essays from the Resistance.