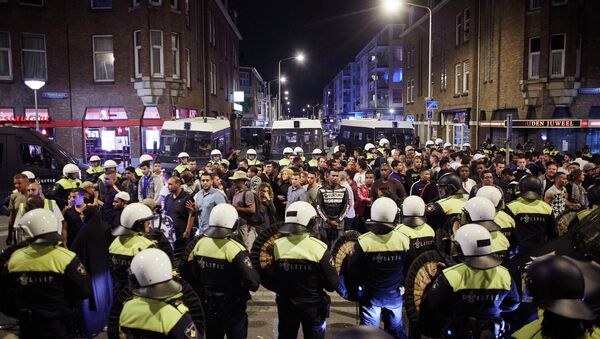 Re-emerging protests against Dutch police over Caribbean tourist death have erupted in The Hague.

Protests are ongoing against unwarranted police actions caused an Arubian tourist's death, revealing the Dutch police attitude towards those who look like migrants.

Hague police, implicitly guilty in the death of a Caribbean holidaymaker, have arrested 200 locals on Friday for violation of a ban on public assembly in the district of Schilderswijk, an area mostly populated by migrants.

61 people have been previously taken in charge as protests with stones and fireworks in the highest crime area lasted four days in row.

United we stand!Justice For Mitch Henriquez

The Park festival saw gross injustice towards a 42-years old tourist Mitch Henriquez from Aruba, father of three, when 6 police officers allegedly wrestled him to the ground while one of them beat him on the head and legs with a baton, according to witnesses. Beaten unconscious, the man died the following day of asphyxiation, presumably caused by the officers.

Police and eyewitness statements are at loggerheads. According to the Dutch public prosecutor, Henriquez told police he had a gun and then resisteded arrest. However, no weapon has been found.

The city mayor, Jozias Van Aartsen though called on fighting discrimination denied accusations that police officers were racially motivated and the tragedy could have of any comparison with similar in the US.

That's not the first time the rights of ethnic minorities rights have been violated in The Hague by police. In 2013 the Dutch police was also condemned for racism and intimidation after public confirmations by former officers they often ruled by prejudice during regular identity checks.

Out of control!! #PoliceBrutality #MitchHenriquez #DenHaag Almost got hit myself

"I'm not planning to go in person to every neighborhood where backward lilies are stirring up trouble," he told journalists.

The men's death leaded to boom in social media with massive call for justice. Minority rights advocates have called on investigations to be resumed by an independent organization, while the family of Henriquez has stayed on the sidelines.