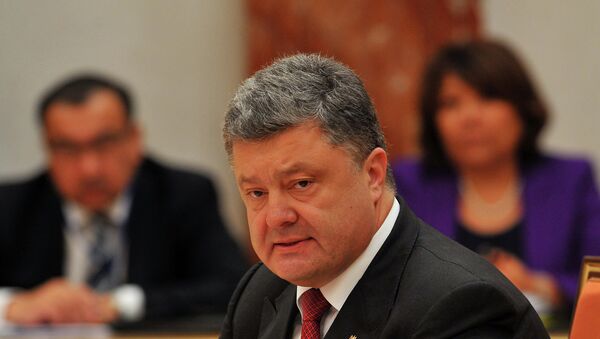 © Flickr / European External Action Service
Subscribe
International
India
Africa
Petro Poroshenko has called on the international community to consider introducing another round of anti-Russia sanctions, should the conflict in Ukraine’s southeast escalate.

Poroshenko to Submit Ukraine Decentralization Bill to Parliament Wednesday
KIEV (Sputnik) – Ukrainian President Petro Poroshenko on Friday called on the international community to consider introducing another round of anti-Russia sanctions should the conflict in Ukraine’s southeast escalate, his press service said.

The United States, the European Union and their allies imposed several rounds of sanctions against Russia, citing the Kremlin's alleged involvement in the Ukrainian crisis. Moscow has repeatedly denied the accusations as groundless.

“We need an efficient and well-coordinated plan in case of breakdown of the Minsk agreements. I’m talking about a new round of [anti-Russia] sanctions,” Poroshenko said at a meeting with a US Congress delegation that is set to participate in the OSCE Parliamentary Assembly meeting in Helsinki on July 5-9.

The Minsk agreement is a set of measures aimed at facilitating the Ukrainian peace process, elaborated by the leaders of France, Germany, Russia and Ukraine in mid-February. The deal stipulated an all-out ceasefire, the withdrawal of heavy weaponry from the line of contact in eastern Ukraine and constitutional reforms to decentralize powers.

The Minsk agreement was signed by representatives of Kiev and the self-proclaimed republics of Luhansk and Donetsk but the sides have repeatedly accused each other of violating it.

Earlier in June, Russian President Vladimir Putin said that Moscow is pressing Donetsk and Luhansk to implement the Minsk deal while accusing the European Union and the United States of not exerting enough pressure on Kiev to fulfill its obligations.