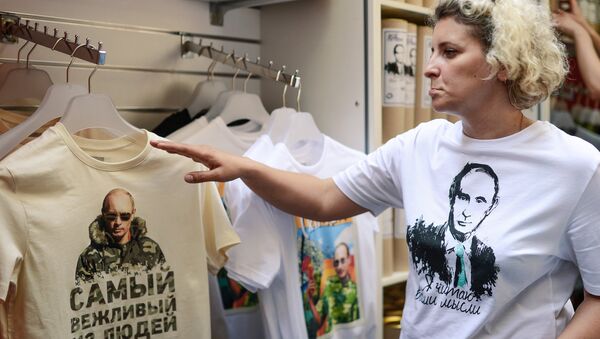 © Sputnik / Vladimir Astapkovich
/
Go to the photo bank
Subscribe
The Baltic state of Latvia has been caught by surprise: its worst nightmare, that Russian President Putin would one day invade, has unexpectedly come true; the image of the Russian leader has gone viral across the country.

If someone wants to sell something, he or she should sell what is popular. As it turns out, the most popular image and brand nowadays is that of Vladimir Putin.

T-shirts with the image of the Russian president are flying off the shelves in Latvia. The seller, a small private company, decided to capitalize on the idea which was first introduced in Russia last year. 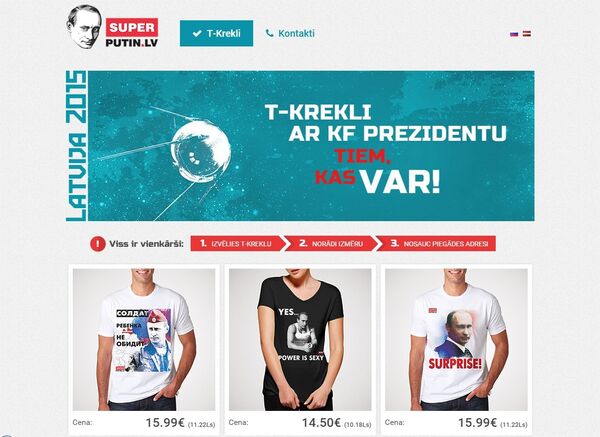 “We want Latvia to be an independent, not only judicially, but economically,” reads a statement on the website of the company. "We see Latvia as unified, powerful and flourishing. We have everything we need for it: a rich history, a wonderful countryside and outstanding people!”

“The only thing we lack is – self-confidence!”

“To acquire the only missing feature, we decided to 'borrow' the image of the Russian president, as it is Vladimir Putin who has become a global symbol of confidence in one’s own abilities on all the five continents of the planet.”

The most popular t-shirts on sale are those that read “An officer would never hurt a child”, “Yes. Power Is Sexy”, “Surprise”, “Great Catch” and “Make Love, Not War”.

“Vladimir Vladimirovich [Putin] has become a generalized character, a quintessence of Russia’s image, and I think that Russia’s image is a top-selling item. All over the world, and all the more so in Latvia. All the t-shirts have hot, interesting sayings and express the mood of my fellow citizens, the one I feel personally as well,” says the brain behind the idea, Natalia Rusinova. 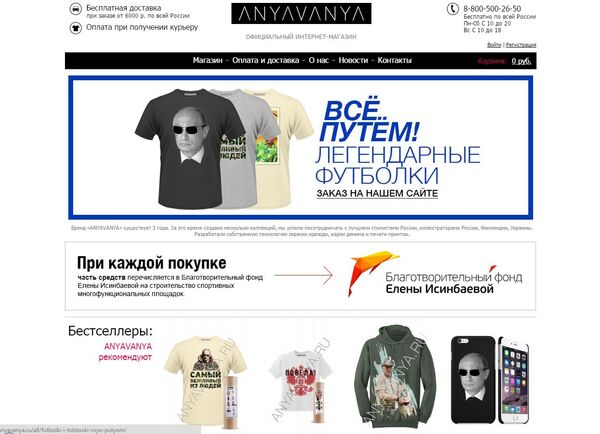 A little over a year ago, t-shirts with the image of the Russian president first hit the shelves of Moscow and were extremely popular from the very start.  Some feature him riding horses, launching rockets, wearing sunglasses or simply smiling.

The most recent prints include the president vacationing in Crimea. The most popular saying is “The Polities of People” in reference to the term “the polite people” used to describe the Russian troops who anonymously maintained order during the unification of the peninsular with Russia in 2014. 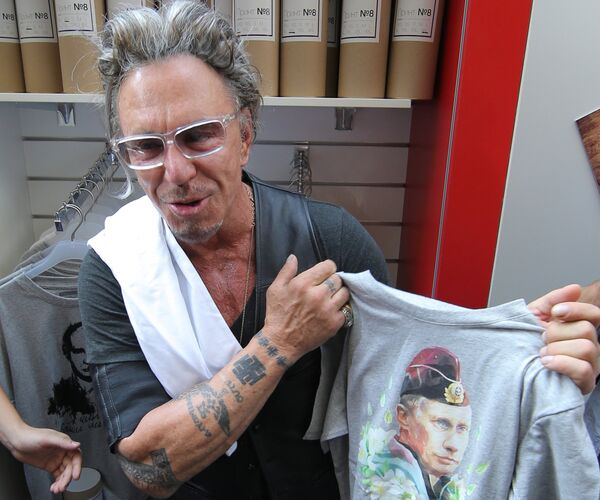 U.S. actor Mickey Rourke during the launch of sales of clothes and accessories featuring the picture of Russian President Vladimir Putin in GUM.
© Sputnik / Vitaliy Belousov
/
Go to the photo bank

Last summer, well-known US actor Mickey Rourke purchased such a T-shirt in the center of Moscow and put it on right away.

“I met him a couple of times and he was a real gentleman, a very cool regular guy, looked me right in the eye,” he said. “I think he is a good guy. If I didn’t, believe me I wouldn’t wear the T-shirt,” Rourke then said.

In October of last year Julius Kacinskis, who has Russian and Lithuanian roots but was born and lives in the US, opened a “Peacekeeper” pop-up store on East 20th Street in Manhattan to sell T-shirts with the image of the Russian president.

000000
Popular comments
President Putin's image is the only politician I'd allow on my T-shirt. Maybe Fidel Castro. If I was offered a Cameron or Obama, Sakaashvili, any of those automatons on a T-shirt with their image my reply would be 'no' accompanied by laughter or scorn. In Britain it's next to impossible to buy Russian products or these types of goods even before the sanctions.