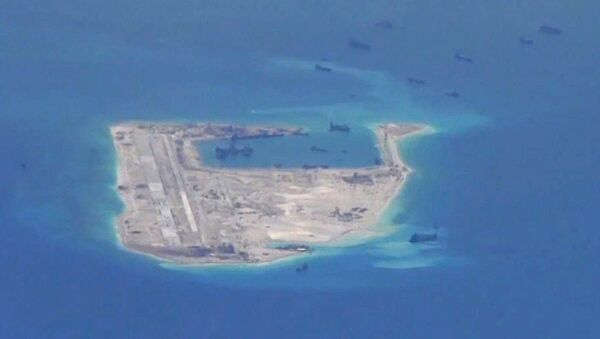 © REUTERS
Subscribe
International
India
Africa
According to new satellite photos, an airstrip being constructed by the Chinese government atop the Fiery Cross Reef could be completed even sooner than expected.

The images, taken on June 28, show the rapid progress made by the Chinese government in building the 10,000-foot runway on Fiery Cross Reef. Large enough to support almost every type of military aircraft, the airstrip is also accompanied by an apron and taxiway.

According to the Asia Maritime Transparency Initiative, which published the photographs, the runway is in the final stages of being paved and marked.

The US military had predicted that the airstrip could be complete as soon as next year, but the new images suggest that estimate underestimated Beijing's progress.

Satellite images also detail two helipads on the island, at least 10 communications antennas, and what appears to be a radar tower.

Further to the east, satellite imagery also provides more detail about construction activity on South Johnson Reef. Significantly smaller than Fiery Cross Reef, the island still features a 3,000 square meter harbor and multiple radar installations. Construction has recently begun on a large military facility in the island’s center, and what appear to be weapons towers.

Beijing’s land reclamation projects are taking place in the South China Sea, a highly contested stretch of water. While China lays claim to most of the sea, there are overlapping claims by Indonesia, Malaysia, Vietnam, Brunei, Taiwan, and the Philippines. Nearly $5 trillion in trade passes through the waterway each year.

Washington has been fiercely critical of the projects, despite China’s repeated statements that it has every right to build within its own territory. The US has also remained silent as regional allies conduct their own land reclamation ventures. Satellite imagery has shown both the Philippines and Vietnam building artificial islands in the Spratly archipelago.

"We also reiterated…our concerns about China’s behavior in the South China Sea, and stressed that substantive diplomacy is the proper way to resolve disputes among the claimants in the region," a US State Department official said last month, ahead of the US-China Strategic and Economic Dialogue.

In the meantime, Washington has, however, stepped up patrols in the region, conducted large-scale military exercises with territorial claimants, and encouraged Pacific allies to counter what it fears to be a growing Chinese influence.