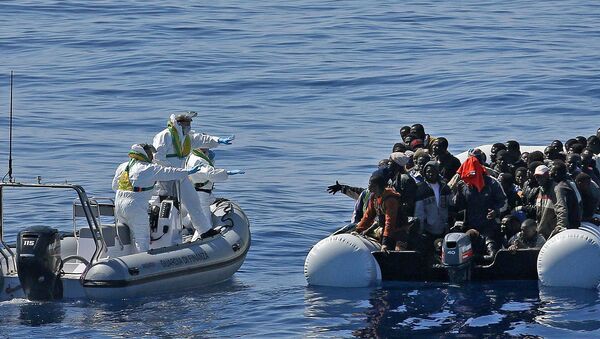 At Least 10 EU States Oppose Migrant Intake Quotas – Austrian Chancellor
In the Czech Republic, intense public debate and protests surrounding the admission of African refugees are intensifying. Some of the protests are taking on a nationalistic tone, with a recent protest in the south eastern city of Brno held under the slogan 'Czechia is for Czechs'. On Tuesday, several hundred people, including several deputies of the country's parliament, gathered in Prague to protest a proposal to voluntarily accept several hundred immigrants.

A recent survey conducted by polling agency Median found that while the Czech Republic already accepts less immigrants than any of its neighbors, the country remains the most fearful of the phenomenon.

Vladimir Bruter, an analyst at the Moscow-based International Institute of Humanitarian and Political Studies, argues that to varying degrees, Czechs' fears are in line with those of other Eastern European countries.

Speaking to Radio Sputnik, Bruter noted that "a feeling of constant anxiety is present. Everyone expects that something is on the horizon, for which society will not be prepared. In general, Eastern Europe is not prepared to accept African refugees. This is the state of public consciousness in the region. When Europe speaks about distributing refugees proportionally, it is simply creating a provocative situation."

The analyst stated that "neither the Czech Republic, nor Poland, nor Slovakia, nor Romania are ready for these changes. And if a number of cities in Western European countries have experience with co-existence with other religions and races, Eastern Europe does not. This requires several decades [to develop] at a minimum," the expert noted.

Bruter observed that there is a sense that Western Europe seeks to purposely spread the acute social problems it faces to those regions of the EU not yet experiencing them.

"The arrival of thousands of African refugees will create a difficult domestic situation, a complex system of relations between communities. This will be a constant social problem, which will begin to provoke, to create social clashes and lead to increased crime."

In this respect, according to Bruter, the negative feelings of the people of Eastern Europe are understandable. Their countries did not play a role in the creation of the present situation of war and chaos in the Eastern Mediterranean, but Brussels is attempting to force them to pay the price in equal measure with the countries of Western Europe.

"In principle, it is necessary to solve the problems of migrants in their home countries. It is necessary to help create jobs for them, and conditions for normal existence. But this is not happening. The West is not interested in doing this, even though it created the situation which has resulted in mass migration. As a result, [Europe] faces a situation of deadlock."

Western Politicians' Naivety is Met With Russian Prudence – Czech Analyst
Bruter's commentary matches those of local politicians and commentators. Last week, veteran Czech politician and analyst Jiri Vyvadil noted that today's immigrant crisis wouldn't exist were it not for the US, French and British initiating wars in countries including Iraq, Syria, Libya, Afghanistan. He argued that it was extremely arrogant of the countries of Western Europe to demand that Eastern Europe should pay for their mistakes.
Newsfeed
0
New firstOld first
loader
LIVE
Заголовок открываемого материала
Access to the chat has been blocked for violating the rules . You will be able to participate again through:∞. If you do not agree with the blocking, please use the feedback form
The discussion is closed. You can participate in the discussion within 24 hours after the publication of the article.
To participate in the discussion
log in or register
loader
Chats
Заголовок открываемого материала
Worldwide
InternationalEnglishEnglishMundoEspañolSpanish
Europe
DeutschlandDeutschGermanFranceFrançaisFrenchΕλλάδαΕλληνικάGreekItaliaItalianoItalianČeská republikaČeštinaCzechPolskaPolskiPolishСрбиjаСрпскиSerbianLatvijaLatviešuLatvianLietuvaLietuviųLithuanianMoldovaMoldoveneascăMoldavianБеларусьБеларускiBelarusian
Transcaucasia
ԱրմենիաՀայերենArmenianАҧсныАҧсышәалаAbkhazХуссар ИрыстонИронауОssetianსაქართველოქართულიGeorgianAzərbaycanАzərbaycancaAzerbaijani
Middle East
Sputnik عربيArabicArabicTürkiyeTürkçeTurkishSputnik ایرانPersianPersianSputnik افغانستانDariDari
Central Asia
ҚазақстанҚазақ тіліKazakhКыргызстанКыргызчаKyrgyzOʻzbekistonЎзбекчаUzbekТоҷикистонТоҷикӣTajik
East & Southeast Asia
Việt NamTiếng ViệtVietnamese日本日本語Japanese中国中文Chinese
South America
BrasilPortuguêsPortuguese