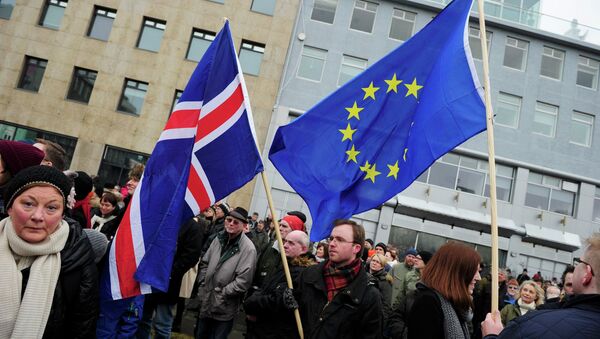 “The EU is going through [a] transformation process. You don't know how developments inside the EU will be, so it is important to at least wait and see,” Sveinsson said on Wednesday.

In March 2015, Iceland officially dropped its bid to join the EU, a process that had been under way since 2009.

The 2013 elections in Iceland brought in a coalition government formed by two EU-sceptic parties that opposed the previous government’s efforts to join the EU.

Icelandic Parliamentarian Says NATO Is a ‘Structure of the Past’
Sveinsson explained that Iceland will particularly be monitoring how the EU approaches possible reforms in the number of rules and laws originating from Brussels.

In a speech to the Center for Strategic International Studies on Wednesday, Sveinsson noted that Brussels bureaucrats “need to look in the mirror” to evaluate the state of the EU.

Iceland considered joining the EU after being hit with a major financial crisis beginning in 2008. The country largely recovered from the economic crash after restructuring its banks to allow private creditors to take significant losses.

After the April 2013 elections, Iceland’s Progressive Party formed a coalition with the Independence Party with plans to end the EU accession as well as end economic austerity.