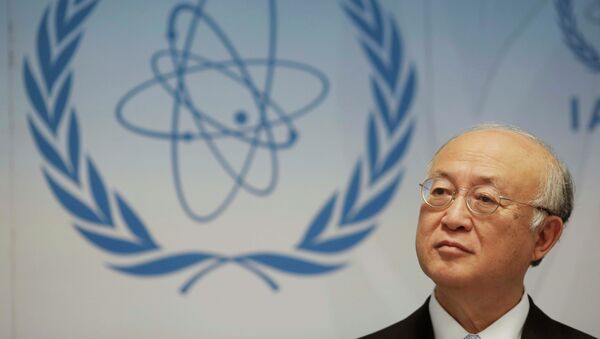 According to International Atomic Energy Agency, agency’s chief Yukiya Amano will discuss cooperation between the agency and Iran.

IAEA Head Arrives in Tehran for Talks With Iran's President
MOSCOW (Sputnik) – International Atomic Energy Agency chief Yukiya Amano will discuss cooperation between the agency and Iran, as well as the issues related to the deal on Tehran’s nuclear program during his visit to the Iranian capital, the IAEA said in a statement Wednesday.

"IAEA Director General Yukiya Amano travels to Tehran today for meetings with President Hassan Rouhani and other senior Iranian officials on Thursday. Discussions are expected to address ongoing cooperation between the IAEA and the Islamic Republic of Iran… and how to accelerate the resolution of all outstanding issues related to Iran’s nuclear programme, including clarification of possible military dimensions," the statement said.

The IAEA is engaged in talks between Iran and the P5+1 group of international negotiators on Tehran’s nuclear program. The agency is tasked with verifying the civilian nature of Iranian nuclear activities.

On Tuesday, the nuclear watchdog chief met with Iran’s Foreign Minister Mohammad Zarif on the sidelines of the Vienna nuclear talks.

Tuesday was the deadline for Iran and P5+1, comprising Russia, the United States, China, the United Kingdom, France and Germany, to reach a deal that would ensure the safe nature of Tehran’s nuclear program and lifting of the sanctions the West imposed against it.

The talks were extended for another week amid disagreements on over proposed IAEA inspections of Iran’s nuclear facilities. Tehran has resisted this clause, which aims at guaranteeing it is not building a nuclear weapon.