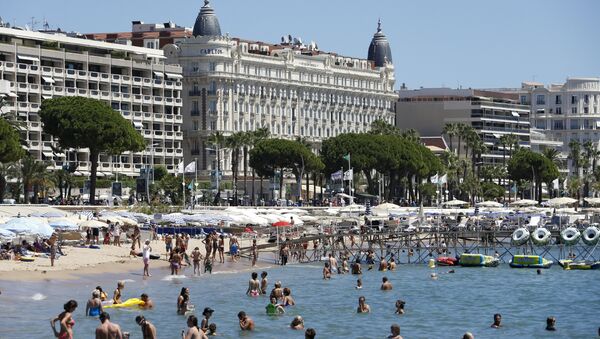 © AFP 2021 / VALERY HACHE
Subscribe
Some of Europe's top tourist resorts in Spain and France have been put on high alert for terrorist attacks, following the shootings in Tunisia and the beheading in eastern France. Europe's largest travel association told Sputnik the threat to tourists was real.

The increased risk of terror threat — caused by the destabilization of the Middle East, the rise of ISIL and the fallout from the Arab Spring across north Africa, has led to intelligence agencies warning of 'soft targets' being high-risk.

So-called 'hard targets' — such as transport systems and airports, as well as high-profile buildings — are already heavily protected by security services, with maximum surveillance. Sources within the intelligence services in Europe now say terrorists are targeting 'soft' spots, including tourist resorts.

Will a single gunmen succeed in killing Tunisia's tourist sector in addition to 30 tourists? http://t.co/OSLhahFK86 pic.twitter.com/jIhUsylCcN

This man tells me don't write bad things about Tunisia. We need the tourism industry. pic.twitter.com/I2NQ42wMrg

Following the shootings in Tunisia, in which a gunman ran amok, killing 38 tourists as they lay in the sun, thousands fled, putting in peril the country's most important revenue earner.

The UK Foreign Office says that the threat of terrorism is rated "high" in more than 30 countries around the world, with popular summer holiday favorites such as Spain and France given the same rating as Libya, Pakistan and Somalia. Turkey, Egypt, Thailand, Australia and Belgium are also rated on the "high" threat list.

Due to ongoing threats to France by Islamist terrorist groups, and recent French military intervention against ISIL, the French government has warned the public to be especially vigilant and has reinforced its security measures. This week, the Spanish government lifted its own threat to a high rating, following the attack in neighboring France.

"It is clear that we are living with the threat of terrorism and, as an industry, it is a situation that we have to manage."

"We saw the industry respond swiftly, decisively and with compassion over the weekend, in very difficult circumstances. The safety of customers is, and will remain the highest priority for ABTA and we shall continue to co-ordinate closely to minimize potential risk."

On Wednesday, the Australian Government issued its own warning about the terror threats in Europe. "There is an ongoing threat of terrorism in Europe. In the past, terrorist attacks have occurred in a number of European cities, such as Glasgow, London, Madrid, Moscow and Paris. Targets have included public transport and transport hubs, and public places frequented by foreigners.

"In addition, a number of planned attacks have been disrupted by European security services in recent years, underscoring the continuing interest of terrorists in attacking European locations," the Australian statement said.

Countries where the terror threat is low include Iceland, Bolivia, Ecuador, Poland, the Czech Republic, Switzerland, Hungary, Vietnam and Japan.