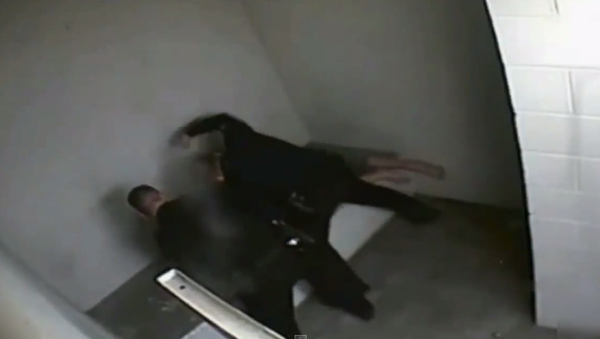 The nine-and-a-half-minute video, which has been released to the public, shows Officer Mark Magness brutally assaulting an unnamed detained man, despite being warned by a fellow officer that the incident was being recorded.

The footage captured Magness yanking the man out of the police vehicle and shoving his face into a doorway.  The victim is heard apologizing, with his face dripping blood, as the officer barks orders at him.

As the man’s handcuffs are removed, Magness yells "get over here!" to which the man replies "F you.”  The victim is then shoved into a cell.

At this point, things get even worse, as the man attempts to strike Magness in the face.  The enraged officer pounces on him, repeatedly punching him with a closed fist.

Other officers witnessing the assault can be heard screaming repeatedly “stop resisting!”  The man is then pinned to the ground and handcuffed.  Magness then grabs a prisoner restraint chair and throws it across the room.

Another officer is seen pointing to his chest to indicate that his body camera is filming the entire incident. "F that!  F that!" Magness yells in response.

The bloodied man is then thrown into the restraint chair, as he apologizes to his captor.

Magness then puts his hands on the detained prisoner again, yanking him up in the chair, then pushing his head back.  He is repeatedly told to stop resisting, despite being detained and sitting calmly as the crazed officer is seen applying pressure to the man’s temples.

"I don't care, strap him to the chair," Magness replies, to the officer who is seen pointing to his body cam, again.

At this point the officer is seen jamming his fingers into the man’s temples and when the man lets out a moan of pain, the officer begins to target the pressure points beneath his ears.

This isn’t Magness’ first time in court for excessive force.

In 2009, after only one year on the force, Magness pleaded guilty to a misdemeanor after breaking a suspect’s arm during a call involving fireworks being set off.

Following the assault, the officer reportedly left the scene, only to return after the suspect called 911 and dispatch sent the nearest officer, who turned out to be Magness.  He then proceeded to pretend that he did not know what happened.

Punishment for that assault? A mere $517 fine.

Magness’ current status with the force remains unclear at this time.