Greeks Gather in 'Yes' Rally Ahead Of Bailout Referendum 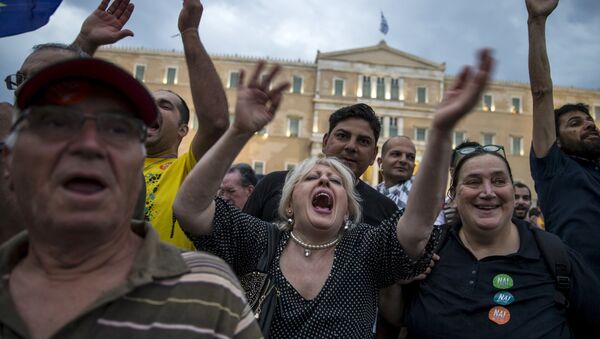 Thousands of Greeks gathered at central square of Athens Tuesday, who wanted to vote "Yes" in the upcoming referendum just hours before the bailout deal expires.

MOSCOW (Sputnik) — Thousands of Greeks gathered at Syntagma Square, the central square of Athens Tuesday, who wanted to vote "Yes" in the upcoming referendum just hours before the bailout deal expires.

Greece Requests 5-Month Delay of $1.7Bln IMF Payment - Deputy PM
Greece is due to vote on July 5 in a referendum on accepting the bailout deal proposed by the international lenders. The creditors want Greece to implement unpopular economic reforms and additional austerity measures in exchange for financial aid.

The pro-bailout deal rally began in Athens at 7.30 p.m. local time [17:30 GMT], according to Twitter posts of the participants and organizers.

On Monday, thousands of Greeks, including several members of the Greek government, gathered at the Hellenic Parliament Building in central Athens in a protest against international creditors' demands to continue strict austerity measures.

Following the 2009 economic crisis, Greece accumulated a multibillion-dollar debt by accepting large loans from the international creditors. The indebted country has sought additional financial assistance to avoid a possible default and exit from the Eurozone.

Greece's current debt exceeds $350 billion, of which $270 billion is owed to the international creditors — the International Monetary Fund (IMF), the European Central Bank (ECB) and the European Union countries.

Athens' current bailout deal with its creditors expires Tuesday midnight. The negotiations between the sides on extending the deal in exchange for austerity reforms have deadlocked.

On Tuesday, Greece was due to deliver the $1.7-billion payment to IMF, but Greek Finance Minister Yanis Varoufakis stated that the country will not make the payment.