US Presidential Election Could Turn Into Real Horse Race 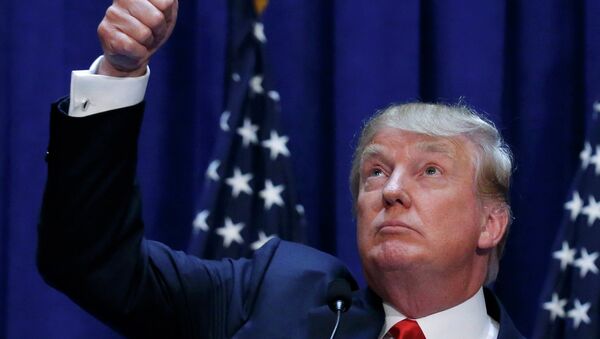 Many laughed about Donald Trump’s intention to run for presidency, thinking he had no chance to win the Republican nomination, much less – the presidency. The results of the latest polls, however, show that Trump ranks second in terms of popularity in New Hampshire, closely following another Republican candidate, Jeb Bush.

Donald Trump is running an active and quite successful campaign for the Republican presidential nomination. According to the latest polls, he enjoys a relatively high level of popularity among Republican candidates.

“Trump represents everything that Republican voters believe. But many of them are still afraid to say it out loud,” Brad Friedman from radio Sputnik's BradCast said while discussing the progress of the US pre-election campaign.

Trump Dumped: NBC Drops The Donald Over Derogatory Remarks About Immigrants
A Suffolk University poll showed that Trump had vaulted into second place in New Hampshire just behind Jeb Bush. Bush received 14%, while Trump followed with 11%.

According to a CNN poll, Bush narrowly leads the field in New Hampshire: Trump has 11% support, just behind Jeb Bush with 16%.

It is remarkable, however, that Trump also ranks first where respondents are asked what candidate they would not vote for under any circumstances: 23% of voters have totally ruled him out.

“There is a big chunk of people who say no: I would never vote for this guy. But Trump easily tops the field when asked which candidate voters think can best handle the economy, […] despite the fact that he had to declare bankruptcy four times.”

The situation is also rapidly changing among Democrats. Hillary Clinton is gradually losing her position as incontestable leader, while Bernie Sanders is coming forward – both with 43% and 35%, respectively.

“We may have a real horse race after all. We’ll see,” Friedman said.