NATO Collapse Could Leave Western Nations at Each Other's Throat 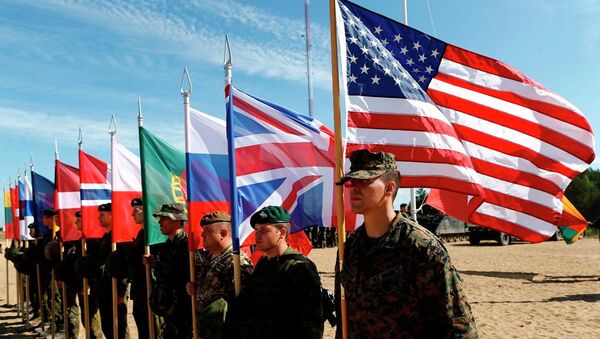 The North Atlantic Alliance has long outlived the obvious reason for its existence, yet the bloc will be around for a long time regardless of any external threat and due to a major internal factor, namely Europe's own violent history, the National Interest reported.

It has worked for nearly seven decades.

"By embedding almost all of Europe in a unified security architecture, powers that warred for centuries like France, Spain, Germany, Italy and the United Kingdom have no incentive to fight one another," Evan Gottesman said, recalling the famous formula that gave birth to NATO: "keep the Russians out, the Americans in and the Germans down."

NATO's Eastern Expansion Root Cause of Current Crisis – German Lawmaker
Nevertheless, the alliance faces challenges to its existence and the main ones are overstretching through enlargement and inner discord.

The US journal calls for a balanced approach to post-Soviet states in Eastern Europe and the South Caucasus, who want to join the bloc. The strategy entails embracing them as partners but not taking them in, for they will be what Gottesman referred to as "a liability for the alliance."

"The United States should be equally clear that while it supports international norms on territorial integrity and national sovereignty, full alliance membership for these countries is not currently conducive to regional stability. This message is critical to NATO's long-term viability," the analyst said.

Brzezinski: Russia Has to Be Assured That Ukraine Will Never Join NATO
The main concern is the following: should the North Atlantic Alliance fail to protect one of its numerous members under the collective defense clause, the bloc would be discredited. If this happens, countries might start leaving and form new alliances.

"Within a generation or two, Europe could be home to an array of hostile alliances, as exist in other regions like the Asia-Pacific and the Middle East, and in Europe itself at other points in history," the National Interest observed.

A greater level of hostility and mounting tensions might well result in a conflict which could shake the whole world.