Chinese-Russian Military Ties Do Not Threaten Other Countries - Ambassador 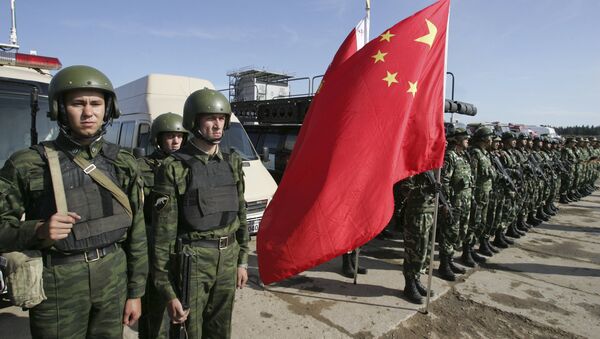 © AFP 2021 / MAXIM MARMUR
Subscribe
The military cooperation between Moscow and Beijing does not encroach on the interests of third parties.

“China hopes to develop an all-around and broad cooperation with Russia, including in military-technical cooperation, to gradually strengthen practical cooperation of the two states [as well as strengthen] friendly exchanges between the peoples of our countries,” Li told RIA Novosti in an interview.

Li emphasized that Moscow and Beijing “are not planning on creating a military coalition in any form, but military cooperation between the two countries is developing in accordance with the fundamental norms of international law and is not directed at third countries and does not encroach on the interests of third countries."

Joking Aside: Russia's Strategic Pivot to China is Very Real
This remark came amid strained relations between Russia and the West over Moscow's alleged role in the Ukrainian crisis. The US-led NATO military alliance began last year to bring troops and hardware to the Russian border citing a commitment to protect member nations.

Moscow has denied providing military assistance to militias in eastern Ukraine, and has condemned NATO for using the conflict to justify an increased presence in Eastern Europe.

The Kremlin refuted claims that it planned to enter into a military alliance with partners in the BRICS club of emerging economies, comprising Brazil, Russia, India, China and South Africa. Russian Deputy Foreign Minister Sergei Ryabkov said in early June that Moscow had no intention to turn BRICS into a military bloc.

000000
Popular comments
It does, however, threaten a potential adversary hell bent on destroying Russia and China. It is a defensive and protective measure. During longer periods of peace the western fascists will suffer from amnesia, hence they need to be remained that occupying and steal Russia´s resources is and never was, a good idea...