Angry Afghans Rally in Protest Against Continuing US Military Raids 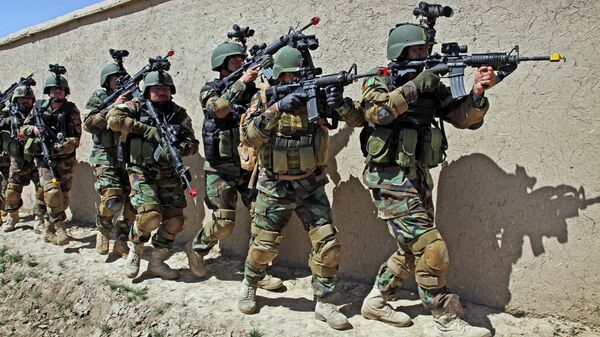 "US Forces conducted an operation… to destroy a cache of munitions that could be used to conduct attacks against Afghans and Coalition Forces," public affairs director Colonel Brian Tribus was quoted as saying by Reuters.

The target of Monday's raid was Jan Ahmad, a local commander who fought the Soviets and then the Taliban, the New York Times reported.

Local authorities complained they had not been consulted ahead of the operation, which took place just north of Kabul.

"As the operation was launched without coordination of local authorities, it made people angry," a spokesman for the governor, Wahid Sediqqi, told Reuters.

Hours after the raid, Ahmad's outraged supporters remained in the streets shouting "Death to America" and "Death to the enemies of Islam," according to the Times. Protesters said the matter should have been handled by the Afghan authorities, not by foreign forces.

"The protesters burned a lot of tires to show their rage," a witness told the Times, "and that, if the issue is not taken seriously, they are ready for violence."

Raids remain a divisive subject in Afghanistan. In 2011, then-President Hamid Karzai demanded "All night raids and searches of Afghan homes should stop immediately."

That call went ignored by US forces for years, leading Karzai in 2014 to refuse to sign a deal allowing US forces to stay in the country, Reuters reported. But President Ashraf Ghani, shortly after taking office last September, signed a bilateral security agreement between the two countries legalizing US solo operations.

Afghans consider any intrusion into private homes to be offensive. Mindful of the bad name that night raids have, the American military has renamed them “night operations,” the Times reported last November.

"These people come in the middle of the night," one Afghan local told Frontline in 2011. "They break into houses. They bring dogs with them. They drag women out of the house. This is an offense to Islam."

According to an analysis released in November 2011 by the US-NATO command, American Special Operations Forces killed more than 1,500 civilians in night raids in less than 10 months in 2010 and early 2011.

In February 2010, US Special Operations Forces conducted a raid on what was supposed to be the compound of a Taliban leader. Instead, the bungled nighttime raid left three women – two of them pregnant – and a local police chief and prosecutor dead.

Mir Hamdullah Munib, a member of the Parwan provincial council, said raids carried out in recent weeks by special forces of the Afghan intelligence service have left the locals angry.

"We are obedient to the government, they can send us one letter or one phone call, and we will go to them for questioning," Munib, whose home was raided, told the Times. "They don't need to cause terror by descending on us in the middle of the night."

Still, American military officials view night raids as one of the most effective tactics in their fight against Taliban insurgents, because they can capture the group's leaders where they are most vulnerable.

But, the operations continue to diminish already precarious ties with the Afghan people, pushing more and more locals to not cooperate with US forces.

"If the Taliban were hiding in my house, I wouldn't tell you. They don't dishonor our women, but your friends do," another Afghan told Frontline in 2011.