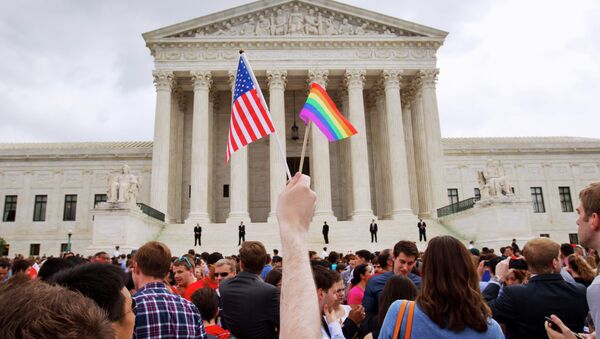 © AP Photo / Jacquelyn Martin
Subscribe
International
India
Africa
As the US Supreme Court finally declares marriage equality to be a fundamental right to Americans in all 50 states in the union, Brad Friedman from the BradCast radio show talks about the days when gay rights seemed like a distant future.

“Not so long ago, back in 2004 Republicans picked gay rights as an issue. They used bans against marriage equality and used hate against gay people as a political weapon.”

Brad Friedman from radio Sputnik's BradCast show talks about how just a decade ago gay people had to fight for their rights. "The politicians who were gay did not come out of their closet. But the LGBT community worked for over a decade to tell the story of gay people, to let the deviously misinformed Americans know about the gay community."

'A More Perfect Union'
Friedman points out that back then the ‘evil Republicans’ and the ‘brainless mainstream media’ were actively using the anti-gay rhetoric to win the 2004 elections.

The guest on the BradCast show, journalist Mike Rogers, talked about how media changed the perception of gay people in America. According to him as the mode of communication changed, people started hearing these amazing stories of gay Americans.

The internet was vital to spreading these stories. The shifting change in the media helped make the change which resulted in the US Supreme Court’s decision. People were able to hear, talk and discuss gay rights via various blogs and forums.

“People were able to see that gay people have loving families and strong loving bond with each other.”

“The politicians such as Dick Cheney only stood up for gay equality after his own daughter came out of the closet and announced that she is gay.”

Similarly, other politicians started realizing that with the ever-increasing gay rights support from the masses, steps towards achieving equality for the gay community are necessary.