US, Japan Did Not Expect China-Led AIIB to Resonate With so Many Countries 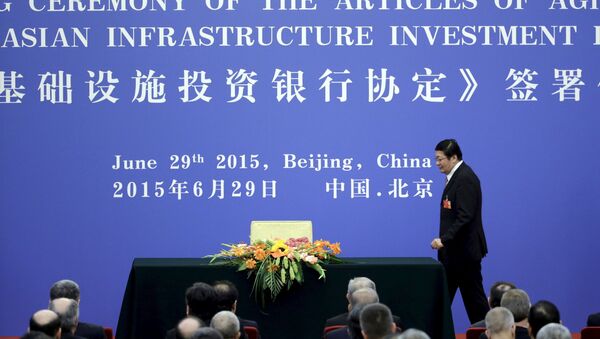 The United States’ and Japan’s concerns over the China-led Asian Infrastructure Investment Bank's (AIIB) potential lack of transparency are unfounded and instead the countries could benefit from joining the bank, a number of experts told Sputnik.

Russia Becomes Third Biggest Shareholder in China-Led AIIB
MOSCOW (Sputnik) – Some 57 prospective founding nations signed a legal framework agreement in Beijing earlier in the day, assigning each a share of voting rights and initial capital in the bank.

The United States and Japan did not take part in the AIIB’s launch due to concerns about a lack of transparency in the bank’s initial formative stages.

Fan Mingtai, the head of the Institute of Quantitative and Technological Economics at the Chinese Academy of Social Sciences, explains the US and Japanese absence as “information asymmetry.”

“[The United States and Japan] did not anticipate that the Chinese initiative would resonate with so many countries at the very start, which is why they did not take particularly aggressive action,” Fan told Sputnik.

Successful Endeavor: BRICS New Development Bank Progress Inspires AIIB
Fan contends that even if Washington and Tokyo have no intention of being founding members of the AIIB, “there is a possibility of their accession to this structure if it functions properly in the future.”

China, India and Russia became the AIIB’s three major shareholders with 26 percent, 7.5 percent and 5.9 percent of vote rights respectively. The bank is expected to rival Western-led financial institutions, including the World Bank and the International Monetary Fund.

Xu Feibiao, an expert from the Institute of Modern International Relations, says that the AIIB will operate in accordance with international practice.

“AIIB’s mechanism will be like the Asian Development Bank, the World Bank and other development institutions,” Xu told Sputnik.

The expert described how the bank will be structured according to a three-tier system. The first level will be a Council, where all member nations will vote, the second will be made up of elected board members from permanent founding nations, and the third will be administrative structures that include the bank’s director, deputies and staff.

Viktor Pavlyatenko, a researcher at the Russian Academy of Sciences' Institute of Far Eastern Studies, suggests that the presence of the United Kingdom, Germany and France increases the bank's international standing.

“I do not think that these countries would have entered the AIIB if the organization was not transparent,” Pavlyatenko told Sputnik.

Yakov Berger, also of the Far East Institute of the Russian Academy of Sciences, says Washington’s European allies began feeling increasingly “uncomfortable” with aligning themselves to the dollar.

BRICS, AIIB Not a Challenge, But a Wake-Up Call for West – IMF Executive
“Here is an alternative offered by China, rendered commercially interesting and politically very convenient for them,” Berger told Sputnik.

Alexander Vorontsov, the head of the Academy’s Korea and Mongolia Department in the Institute of Oriental Studies, points to South Korea as another US partner that chose to take part in the AIIB.

“Despite possible political differences with its senior military and political ally, nevertheless, [South Korea] decided to take a most active part in AIIB,” Vorontsov told Sputnik.

Earlier in the day, local media quoted a number of former US officials as keeping the possibility of US membership in the AIIB open.