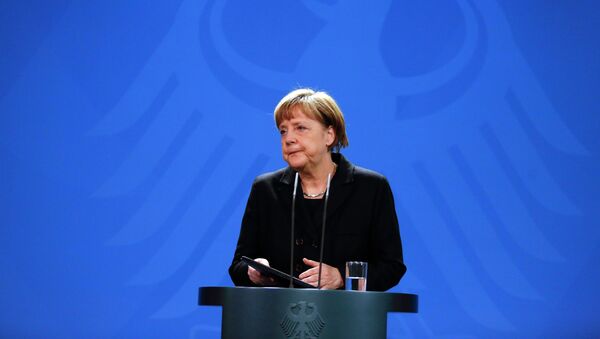 Compromise is key for Europe, but Greece's leadership is not showing willingness to achieve it, German Chancellor Angela Merkel said Monday.

BERLIN (Sputnik) — German Chancellor Angela Merkel said that Europe can function only when it is able to compromise.

"Europe can function only when it is able to compromise. This means that between solidarity and responsibility we should always look for a compromise. No one can get 100 percent. It is necessary to state that the Greek side has not shown will to reach such a compromise, this was evidenced by the halt in negotiations and the decision to hold a referendum," Merkel told reporters.

The German Chancellor said the international creditors’ latest offer to Athens was generous and did not rule out additional talks after the country holds a referendum on the reform package.

The country is expected to hold a nationwide vote on the agreement with its creditors on July 5, five days after the current bailout deal expires. Greece needs to repay the International Monetary Fund $1.77 billion before the June 30 deadline.

Incompetent ECB Policies Brought Greece to Its Knees – French Media
Greek Prime Minister Alexis Tsipras implored European officials by telephone to grant additional time until after the referendum, as he grapples to unlock the next $17-billion funding package.

As news of the breakdown in talks emerged over the weekend, Greek banks announced that they would not open on Monday to avoid a mass exodus of deposits.

Merkel warned that failure to reach a deal after months of negotiations could adversely affect not only Athens’ membership of the single monetary union, but the euro and the European Union on the whole.