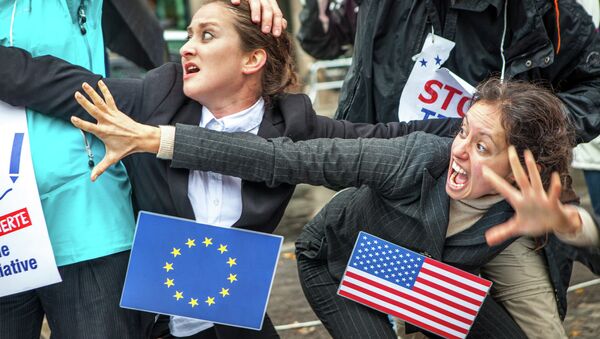 © Flickr / akob Huber/ECI Stop TTIP!
Subscribe
International
India
Africa
Members of the European Parliament are finally realising the full extent of the undemocratic effects of the proposed TTIP transatlantic trade alliance, according to a prominent critic of the deal, speaking exclusively to Sputnik.

The controversial TTIP agreement has been heavily pushed by the US, with President Barack Obama calling for the deal to be signed by the end of 2015. However, critics say that the negotiations have been dominated by industry lobby groups keen to break down tight EU regulations over food safety, medicines and other major areas of trade, where the EU has tougher regulations — imposed by the European or member state parliaments.

Meet the EU & US #TTIP negotiators and explain your views: http://t.co/noFa1CXSqs pic.twitter.com/0DDwqS1P49

Protests and Parliament Chaos Hurting US Plans for a 2015 TTIP Deal
In a draft report to the European Parliament, the Trade Committee MEPs warned that the huge EU-US trade deal should deepen EU access to the US market, but must not undermine EU standards or the right to regulate in the public interest.

MEPs were divided two weeks ago when they were due to vote on a motion on the TTIP but deferred it twice as MEPs tables over 100 amendments, following fierce criticism in their constituencies.

MEPs became aware of the massive public backlash they could get if the deal led to a harmonization of regulatory systems.

"TTIP is a corporate heist of democracy, the scale and audacity of which we've never seen before."

"The investment protector clause, known as ISDS, allows corporations to potentially sue governments for terminating contracts and, despite reassurances to the contrary, there is absolutely no evidence to claim that public services have or could be fully protected now or in the future.

#TTIP is back on agenda of @EP_Trade committee later today. Click here to see what's at stake http://t.co/v9pzahJkPY pic.twitter.com/JRfxEY5rTD

"You need look no further than the Czech Republic, Slovakia and Poland who signed investor-state trade agreements to see that the worst can happen. They've been sued 127 times and lost the equivalent funds that could have employed 300,000 nurses for a year in the UK.

"EU citizens should be under no illusions. 92% of those involved in the TTIP negotiations were corporate lobbyists. So it should come as no surprise that it seeks to circumvent so called obstacles to profit, such as regulation and other hard won democratic processes that protect the rights of people, our public services and the planet."

Ms Finch-Lees wrote in her column in the Independent once that she was sitting next to a big oil company executive on a long-haul flight, while on her way to speak at an event that his company was banned from. She asked the man how he felt about this and he replied: "Corporations are driven by one thing, making as much profit as possible. If they're socially responsible in the process, that's dandy. If not, too bad. Either way profit comes before people and planet."

THIS is the greatest threat to our freedom as we know it. #TTIP is coming to a town near you. #nhs pic.twitter.com/5QVPI0ZuML

Critics believe the TTIP is being negotiated in secret and is anti-democratic. In the Netherlands on Monday, campaign group Foodwatch said the Dutch government was systematically misleading the Dutch people about the consequences of the controversial Transatlantic Trade and Investment Partnership (TTIP) deal.

It said figures from reports are systematically selected to give a positive image of the trade agreement and adverse effects are ignored. "It is a scandal that the government is giving the Dutch people a one-sided picture of a subject about which a great many people are worried," Foodwatch said.

MEPs were due to hammer out the next stages of the TTIP agreement at a meeting on Monday.