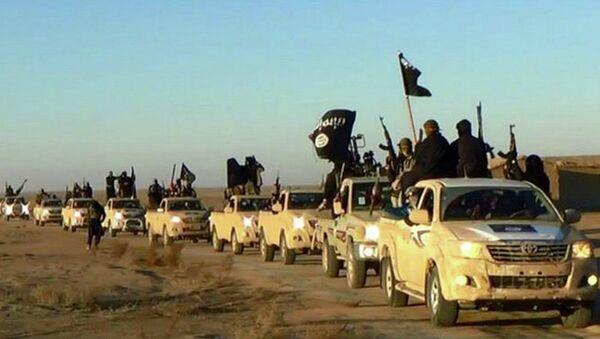 MOSCOW (Sputnik) — Cameron warned that it would take a great deal of patience and resolve to beat ISIL.

"We have to be in this for the long haul," Cameron said during BBC Radio 4's Today show.

"Our action in Afghanistan and American to defeat al-Qaeda in northwest Pakistan has reduced the threat level from that area of the world radically. Now it has been replaced by a new threat, the threat of ISIL," Cameron told UK’s public broadcaster BBC.

Taliban: No ISIL Recruiters Allowed in Afghanistan
ISIL recruiters are known to be increasingly tech-savvy, grooming future fighters through social networks. Many UK nationals, including teenagers, have fled to Syria and Iraq in past months to join the Islamic State caliphate.

Wake Up, EU: Migrant Quotas 'May Bring ISIL Militants' to Europe
He said that ISIL insurgency has to be fought "with everything we can." The way to beat it is by fighting the radical narrative on every front, according to the prime minister.

Some 600 UK citizens are estimated to have gone to Iraq and Syria to fight alongside jihadists, including ISIL, according to UK government figures. Intelligence services within the country believe the actual figure is likely to be as high as 2,000.

"We must look at how we can work with countries like Tunisia to counter this online propaganda," Cameron said on Facebook. "We must also deal with it at its source, in places like Syria, Iraq and Libya, from where ISIL is peddling and plotting its death cult," he added.