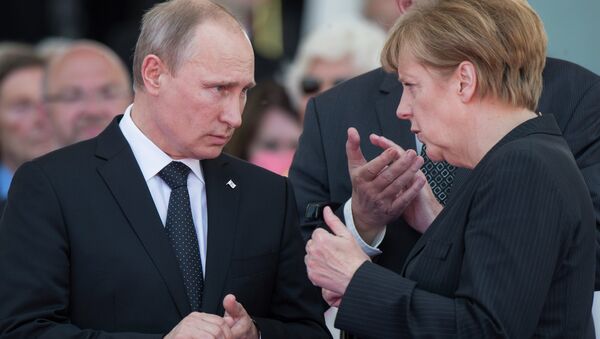 Due to the Ukrainian crisis, the relations between Russia and Germany in 2015 are going through tough times, German Chancellor Angela Merkel said, when greeting participants before the start of the 13th conference of Russian and German sister cities.

Speaking before the conference, Merkel stressed that Russia and Germany should use each and every opportunity to re-establish a direct dialogue.

"2015 is marked by a serious examination in the relations between Germany and Russia. First of all, the situation in Ukraine led to significant differences [in opinion]. This is why it is essential to use every opportunity to establish an open dialogue," the German Chancellor said.

Germans Urge Merkel to Make Peace With Russia – German Newspaper
During the conference, meetings of the five working groups will be held, which open up new landscapes for exchange of experience, including economic cooperation, local self-governance, vocational training, social and historical activities.

Earlier, activists of a German peace initiative appealed to German Chancellor for the peaceful resolution of the Ukrainian conflict and an organization of a multilateral conference with Russia's participation to discuss possible way outs.