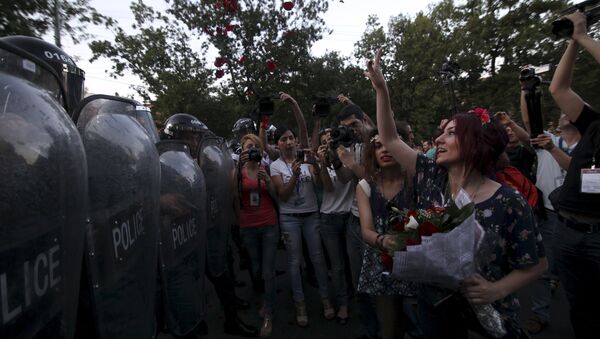 Organizers of the mass protests against a proposed 16-percent hike in electricity prices said they would hold a decisive rally Sunday to force the government to scratch the controversial proposal altogether.

Protests in Armenia Continue as Gov't Assumes Burden of Electricity Tariffs
“They annulled neither the ruling by the regulatory commission we called for, nor did they meet our demand to punish those who ordered the violent breakup of the protest rallies, that’s why we are going to have a public discussion and will announce our decision tomorrow,” Radio Azatutsyun (Freedom) quoted one of the protest leaders as saying.

Armenian President Serzh Sargsyan on Saturday suspended a controversial hike in electricity prices but the move failed to appease protesters who vowed to keep up with the largest anti-government demonstrations the ex-Soviet nation has seen in years.

Under pressure to end the unrest, President Sargsyan announced that the government would temporarily "bear the burden" of the higher rates pending an audit on "how justified the tariff raise is and what its consequences would be for the country's economy."

He did not rule out an eventual nationalization of the Armenian Power Grids company.

The protesters dismissed the president's announcement as inadequate and repeated demands for the price increase to be scrapped altogether.