Joking Aside: Russia's Strategic Pivot to China is Very Real 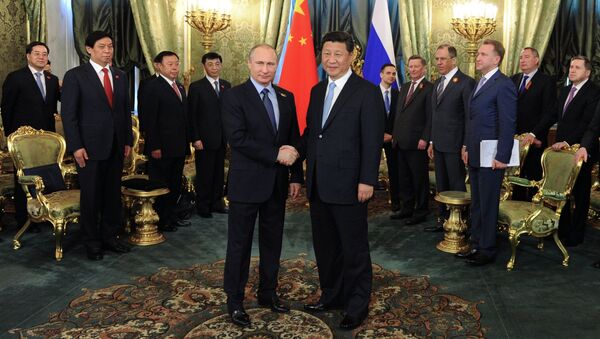 It would be wrong to consider Moscow's strategic eastward shift a sort of PR campaign aimed to convince Russians that their country can exist without the West; the Kremlin's pivot to China is real, a Berlin-based writer noted.

"It would be wrong to discount Russia's swing toward China as just a PR campaign to convince Russians their country can do without the West. Russia is a big ship and turning it around is not a quick exercise, but the trend toward closer economic ties with China is real," Mr. Bershidsky emphasized.

St. Petersburg Forum Sees Russia Give Birth to New World Ordering – Engdahl
Although most "mega-deals" inked by Moscow and Beijing have not borne fruit yet, China has already become one of the "biggest sources of funding and investment for the Russian economy," the publicist stressed. Furthermore, China's share of Russian trade is increasing as well.

According to the writer, Beijing's direct investments in Russia's economy have grown up to $1.3 billion from $450 million. It is yet a "tiny amount," but at the same time a sign of change, he elaborated.

Leaving US Currency Behind: Russia and China Challenge Dollar's Hegemony
And this year Russia will most likely see another hike in Chinese loans, due to a recent agreement allowing Russian companies to obtain up to $25 billion from Chinese banks against the Kremlin guarantees.

A big amount of this money is going to Russian oil companies, namely state-controlled Rosneft, which has in its turn also increased sales to China.

"In May, Russia sent 930,000 barrels of oil per day to China, overtaking Saudi Arabia in that market for the first time," the publicist underscored.

Meanwhile, European major energy companies have acknowledged the trend. For instance, this month BP bet on the growth of Russia's energy trade with China by paying $750 million for a 20 percent stake in Rosneft subsidiary Taas-Yuriakh Neftegazodobycha, according to the publicist. Taas-Yuriakh Neftegazodobycha is licensed to explore a large oil field next to China's northern border, he elaborated.

China Considers Russia One of Key Global Partners – Foreign Minister
On the other hand, China Railway Group and Russian Railroad have kicked off a new project aimed at designing and building a high-speed railway between Moscow and Kazan. It is expected that the network will be extended to Beijing, reducing the time of the journey between Moscow and China's capital to only 48 hours.

"In that respect, sanctions have done Russia a favor. They have forced the regime to accelerate much-needed market diversification and to pay more attention to the country's huge, underdeveloped eastern regions," Mr. Bershidsky stressed.