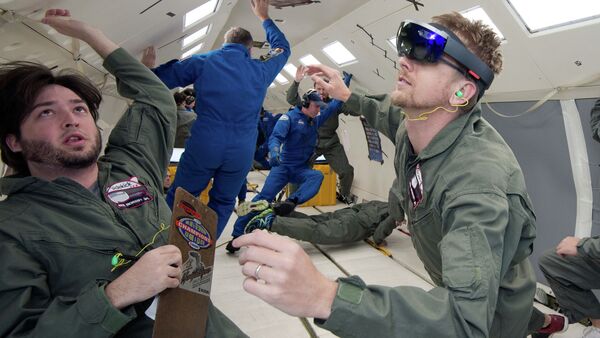 © NASA
Subscribe
International
India
Africa
NASA and Microsoft have kicked off their joint Sidekick project, equipping American astronauts with the HoloLens, a holographic computer, to provide instant virtual assistance to crew on the ISS.

The new Sidekick project will test Microsoft's cutting edge HoloLens devices in space; the new equipment is designed to improve American astronauts' abilities to explore and to learn by embedding high-definition holograms over their physical environment — creating what has been called a "mixed reality."

"HoloLens and other virtual and mixed reality devices are cutting edge technologies that could help drive future exploration and provide new capabilities to the men and women conducting critical science on the International Space Station," Director of the ISS program at NASA Headquarters in Washington Sam Scimemi explained, as cited on NASA's official website.

Science & Tech
World Wide Web: Russia to Launch 672 Satellites for Global Internet Service
The ultimate goal of Sidekick is to provide the ISS American crew with quick and timely help from ground operators. The researchers claim that the use of Microsoft's sophisticated device may bolster the efficiency of US space missions and at the same time may substantially reduce crew training requirements.

Sidekick project has two operational modes, namely "remote expert mode" and "illustration mode." The first one uses a Skype service, allowing an operator on Earth to coach a crew member through a mission, providing him or her with real-time guidance and creating short notes within the astronaut's virtual environment.

The second mode creates animated holographic illustrations on objects which can be seen and interacted with by crew members wearing the HoloLens. The feature is regarded as an invaluable resource that provides vital information in a clear and lucid way.

HoloLens "understands" an individual's gestures, gaze and voice: it's possible to create holograms with a wave of your hand, communicate with applications using your voice and navigate between them just by a glance of your eyes.

And this is only the beginning. NASA's researchers are currently mulling over the use of HoloLens during future missions to Mars.

NASA and Microsoft developers have already tested their Sidekick project on the board of Weightless Wonder C9 in reduced-gravity conditions. It is expected that two HoloLens devices will be delivered to the International Space Station (ISS) this month, carried by a SpaceX rocket.