Boston Bomber Accomplices Could Face Prison in Kazakhstan With US Consent 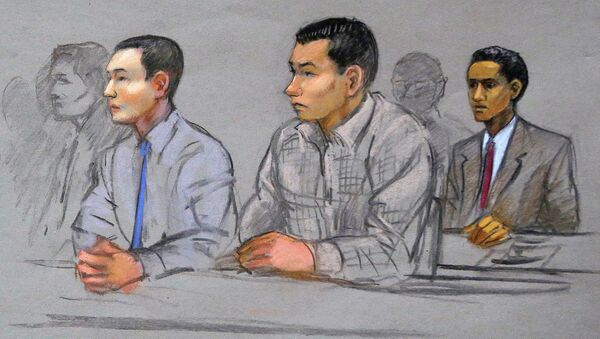 © AP Photo / Jane Flavell Collins via AP, File
Subscribe
Two Kazakh friends of Boston marathon bombers, who helped to hide evidence of attack, may be extradited to their homeland to be jailed.

Judge Formally Imposes Death Sentence for Boston Marathon Bomber Tsarnaev
MOSCOW (Sputnik) — Civilians of Kazakhstan, Azamat Tazhayakov and Dias Kadyrbayev, jailed in the United States may be transferred back to their homeland with the permission of the United States, the first deputy prosecutor general of Kazakhstan said Thursday.

Earlier in June, they were sentenced by a US federal judge to 3.5 and six years in prison, respectively, for obstructing the investigation into the April 2013 bomb attack carried out by Tsarnaev brothers. According to the prosecution, the two men collected a backpack containing evidence from Dzhokhar Tsarnaev’s dorm room at the University of Massachusetts Dartmouth and threw it in the trash.

"The consent of the United States is necessary for the transfer of the convicts to their homeland. Otherwise, they will serve their sentences where they were convicted," Iogan Merkel was cited by Novosti, Kazakhstan news agency.

On Wednesday, Dzhokhar Tsarnaev addressed victims of the bombing for the first time after a US judge sentenced him to death for his role in the 2013 Boston marathon bombing that killed three people and injured more than 260. His brother Tamerlan was killed in a police shootout in the days following the attack.