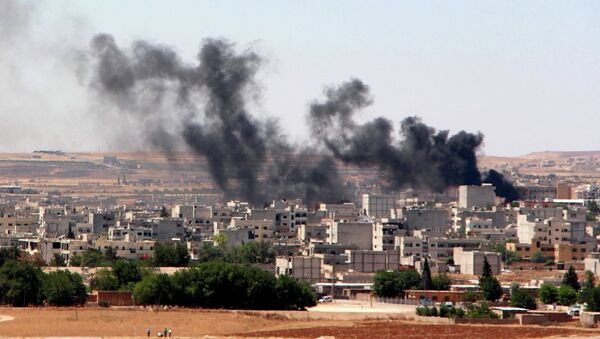 © AFP 2021
Subscribe
A leader of one of Turkey's pro-Kurdish parties has accused the Turkish state of aiding and supporting ISIL following a fresh attack on the Syrian city of Kobane, which has been described as a "massacre".

Figen Yuksekdag, co-leader of the pro-Kurdish Peoples' Democratic Party (HDP), reacted angrily to the news that ISIL fighters had entered Kobane and started attacking civilians, saying that there was a "high probability" that the attackers had traveled to the city from Turkey, as it lies just a couple of kilometers from the Turkish border.

"The Turkish government has supported ISIL for years. Today's massacre is a part of this support," she said.

This young woman and her child were among civilians killed in attacks by Daesh (ISIS) terrorists today on Kobane, June…

The accusations that Turkish border officials may have let the attackers into Syria is set to stir more animosity among Turkey's large Kurdish minority, who have had longstanding criticisms of their treatment by Ankara.

The Turkish government strongly rejected the claims, with the country's foreign ministry spokesperson labeling the allegations as "lies."

The attack also comes at a crucial time for incumbent Turkish President Recep Tayyip Erdogan, after his AK Party failed to secure enough seats in Turkey's recent elections to form government, with negotiations continuing to try and create a coalition agreement with minor parties.

Yuksekdag stepped up the attack on Erdogan, saying that the Turkish establishment was suffering from a lack of credibility over the manner in which the ISIL saga has been managed.

"The remarks of Turkish politicians are null and void for us. It is up to the Turkish government to prove it does not support ISIL."

Although Turkey is part of the US-led coalition against ISIL, the country has come under fierce criticism for its perceived lack of involvement in trying to stop the threat of ISIL in Syria and Iraq, drawing the ire of US officials in the process.

A lot of accusations on Kurds' Timeline against #Turkey. Regardless of the truth, there is clearly no trust between the two sides. #Kobane

Critics continued to claim Turkey was supporting ISIL, following the country's decision not to intervene during the jihadists' siege of the city in 2014, with many Turkish Kurds also angry at border officers for refusing to let would-be fighters enter Syria to help defend the city.

Among those critics was Syrian President Bashar al-Assad, who during an interview with US media earlier this year, said that President Erdogan was complicit in ISIL's actions.

"He doesn't only ignore the terrorists from [Turkey] coming to Syria. He supports them, logistically and militarily. Directly. On a daily basis."

According to Kurdish militia sources, the ISIL attack of Kobane began early this morning when a group of five cars — loaded with up to 35 jihadists — entered the town, set off a car bomb and started firing at civilians.

Attackers then entered the city's neighborhoods, according to sources, while members of the Kurdish militia group, the YPG, said they were now looking to "surround" the ISIL fighters and "sweep the area."

Despite speculation and accounts from locals suggesting the terrorists come from Turkey, YPG spokesperson Rêdûr Xelîl told the Telegraph that they didn't have concrete information on the matter.

"So far, we have no confirmed news if this group entered Kobane through the Turkish borders or not. The primary information and the eye-witnesses say that they entered from Turkey, but officially we don't have confirmed information yet."